Today In "Both Sides Do It": Twofer Tuesday 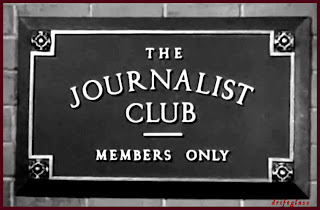 
Trust in the media is at an all-time low. That’s a terrible thing for all of us.

Well, at least he gets the headline right. And then, we take that sharp and inevitable turn into...


...
GOOD!, some of you will, undoubtedly shout -- particularly if you are either a conservative Republican or liberal Democrat. You deserve what you get! Your years of lies and agenda-pushing have finally caught up to you. WE ARE ON TO YOU.

There it is -- pure, uncut Fournier Viagra.


But, I believe really strongly that the decline in trust in the media is primarily attributable to partisans -- whether in politics or in the media -- who have a vested interest in casting the press as hopelessly biased. What better way for liberal or conservative talk radio to (a) lure listeners and (b) stoke outrage than to insist that the mainstream media is lying to you? What better way for politicians to raise money from partisans already skeptical about the media than to say the media isn't telling the truth?


The rise of outside partisan groups -- on the left and the right -- has coincided with a bumper crop of partisan-first media outlets designed to foment rage and exasperation with the mainstream media's alleged missteps. It's good business for them -- and just plain terrible for the American public.

And now to stick the landing...


The belief -- pushed by these groups and outlets -- that there are no referees (or even rules) in all of this makes disagreeing without being disagreeable is virtually impossible. The idea of reasonable people disagreeing has also been laid to rest or damn near it. The realities of our modern political dialogue -- if you can use that word to describe it -- is that people who disagree with your point of view are at best dumb and at worst purposely misunderstanding things.

25 years ago, shortly after Ronald Reagan took the Fairness Doctrine out behind the White House tool shed and shot it in the head,  Rush Limbaugh went into the business of wholesale, coast-to-coast slandering of Liberals.  It was a very profitable business and Mr. Limbaugh spawned many imitators who made themselves rich by calling people like me a traitor.

But people like Cillizza didn't give a shit, because they're not Liberals.

20 years ago, Newt Gingrich turned Limbaugh-language (Call 'em "traitors". Call 'em "cowards". Call them "unAmerican". And do it Every Fucking Day in front of every microphone and camera you can get in front of) into the everyday vocabulary of the entire Republican Party and turned slandering and destroying the "Democrat" President of the United States into their party's only guiding principle.  From the halls of Congress to 1,000 radio stations, to Fox News, to the doublewides of Sisterfuck, Arkansas, hating Libruls and trashing Clinton became their anthem, their team sport and their church.

And the mainstream press?  Well they went right along with it because who doesn't enjoy kicking the shit out of a few Dirty Hippies?

And so, having spent the Clinton Administration ranting about the illegitimacy of the Clinton presidency and the horrors of activist judges, 15 years ago the Republican Party used activist Republican judges to hijack the 2000 presidential election for George W. Bush. It was a busy time for Republicans, and, in the persons of Karl Rove and Dick Cheney (and many, many others), they imported the Gingrich/Limbaugh mindset into the heart of the Oval Office.

It was also high cotton for Conservative Public Intellectuals: for example. David Brooks went from slandering Liberals in The Weekly Standard to slandering Liberals in the New York Times, while his boss -- Bill Kristol -- was handed one, high-profile media gig after another from which he could spread his depraved neocon filth.

All over the Beltway, the media's Very Serious People were making out like fat rats by bagging on those dirty, myopic, terrorist-loving, Murrica-hating Liberals. But people like Cillizza didn't give a shit, because they're not Liberals.

And then, very quickly, it all started going tits up.

Oh, and those budget surpluses which Bill Clinton had painstakingly accrued? Pissed away by Bush tax cuts which Liberals had warned would be a disaster, and by the Bush Forever War which the Neocons had sworn would pay for itself.  Replaced by the largest deficits the country had ever seen.

This was the moment when the Bush/Cheney/Rove/Limbaugh/Fox News/Gingrich/DeLay Party began to implode.

This was the moment the when the voices of Dirty Liberal bloggers and radio talkers -- who had been right all along and been punching back as hard as they could all along -- began back breaking through.

And -- surprise! -- this was also the exact moment when people like Chris Cillizza and Ron Fournier and David Brooks suddenly decided that the real problem with Murrica was that The Extremes on Both Sides were mean and rude and disrespectful of Very Serious media people...

...like Chris Cillizza and Ron Fournier and David Brooks.
at September 29, 2015

michaelbaldwinbruce said...
This comment has been removed by the author.
11:55 AM

Wait, Cillizza says, "And while Republicans trust the media less than Democrats do, the numbers across all party affiliations are in rapid decline from even a decade ago."
Except from the graph immediately below that line, the Republican trust is shown to be essentially unchanged and even slightly up, from 31% to 32%. And not for nothing, Democratic trust at 55% is still a majority of Democrats. But both sides!
If Silly-Zaa wants to build trust in the media, as a me-diot himself, he could start by making sense. Or at least hide the graphs that blatantly contradict what he's writing.

How both sides want to shut down the Government to get their way?

This seems to occur when the GOP has majorities in the House and Senate.

When was the last time the Democrats shut down the Government over over spending on the Benghazi Select Committee? The IRS allowing TEa Party hacks tax breaks under fake qualifications for 501C4's. Which I have to pay for.?

The media both siderism fantasy is deemed needed for the nation to have more than one political party. You know, competition in the market place.

Instead of allowing the GOP to continue its harmful extremist venture. t The media should call them out that they get a real dose of sunlight instead of going to the tanning bed like Boehner. True sunlight being the disinfectant.
Boenner is fodder from his own party. They go home to districts and blame the Speaker for their failures.
The Wing nut media echoes that lie. They keep their seat as they sacrifice the Speaker they elected.
No accountability for them electing Boehner as Speaker is there?

I am surprised the House republicans do not attempt to elect Netanyahu therrir next Speaker...!
Hell they think Putin is a strong adorable get-things-done sort of guy when they compared Putin to Obama.

The two most useless bits of twaddle come together.

"The way to fix the world is for vast numbers of people to all do what I want at the same time."

"I examined what my boss did, and concluded everything he did was perfect."

And that's not even counting "both sides". Good thing they're getting paid for this.

Let's not even get into Sheepshag, Texas... xD