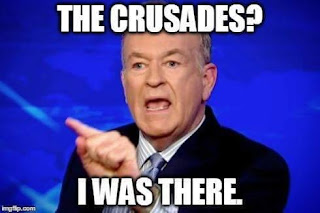 This week in "No One Noticed" news, Bill O'Reilly is quite correct:

He's right; in pursuit of the kind of viewer who thinks Bill O'Reilly is a genius, MSNBC executives have insulted its core audience so relentlessly and debased its currency so thoroughly, why should anyone care about them whacking their midday lineup and replacing it with Moar Shuck Todd?

You know what else no one cares about?

The fact that, while Brian Williams had to eat a humiliating public suspension and take a demotion for making shit up, the scandal of the serial lies of Bill O'Reilly has now completely vanished down the memory hole and Mr. O'Reilly's career continues to roll merrily along, unperturbed.

The fact that Nobel-prize-winning economist and New York Times columnist, Paul Krugman, penned yet another devastating vivisection of the Cult of Centrism which has killed our politics, and which disappeared down the memory hole within a few hours of being published.

The fact that New York Times columnist and America's leading Conservative public intellectual and Moral Scold, David Brooks, absolutely shit the bed in print just two weeks ago. Since then, all the Very Serious People who idolize Mr. Brooks and all that he stands for have very conspicuously avoided mentioning the incident or asking him a single question about it. And so, down the memory hole it goes as well.

To understand how completely our media and our politics are being wrecked and by whom, one need only draw a map using these four "disappeared" stories as cardinal points.

Rightly or wrongly, the MSM bosses expected better of Brian and so he had to be publicly humiliated. No one, including I suspect, the piggish Roger Ailes expects anything serious or honest from the sexist and thuggish Bill-O and so he gets to continue his rants on the RWNJ propaganda outlet. The other three stories simply reinforce the obvious fact that radio and TV in this country are overwhelmingly conservative.

Competence in journalism seems over-rated--Eric Alterman and the long-lost and missed Media Whores Online were my introduction to the idea that competence is probably actually deadly to a pundit. I'm not sure how Krugman keeps a job without having ever lit a candle at the altar of High Broderism. But for Fox Mushroom Farm, I think O'Reilly's dishonesty is viewed as a feature, not a bug. His capacity for manure spreading is very, very good for the crops.

No one expects better or different from David Brooks, either. Even Pat Buchanan can get resuscitated 'round these responsible mainstream journalism outlets. And don't get me started on the putrid liquescence that is George Will of late (and early). Established names don't die. No matter how many times they gasp like air-exposed fish.