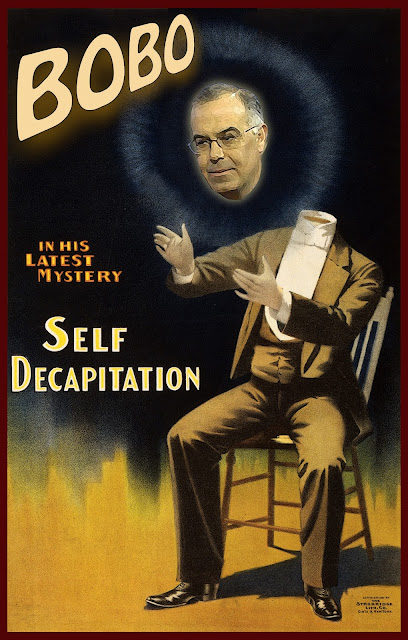 This week watch how Mr. Brooks makes all of the crucial details of George Bush's Iraqi Debacle (and his own deep complicity in it) completely disappear in two, short paragraphs.

...
Over the past centuries, Western diplomats have continually projected pragmatism onto their ideological opponents. They have often assumed that our enemies are driven by the same sort of national interest calculations that motivate most regimes. They have assumed that economic interests would trump ideology and religion — that prudent calculation and statecraft would trump megalomania.

They assumed that the world leaders before 1914 would not be stupid enough to allow nationalist passion to plunge them into a World War; that Hitler would not be crazy enough to start a second one; that Islamic radicals could not really want to send their region back into the 12th century; that Sunnis and Shiites would never let their sectarian feud turn into a cataclysmic confrontation in places like Iraq.
...

As with all magic tricks, the key gere is misdirection.  I this case, Mr. Brooks' little carnival act depends on keeping the rubes focused on big, sweeping, historically distant phrases like "centuries"  and "Western diplomats" and "1914" and "Hitler"...

...rather than on the actual words of actual, still-gainfully-employed Neocon war pimps like Mr. Brooks' former employer, Bloody Bill Kristol, some of whose imperishable wisdom has been helpfully compiled by Eric Alterman here:

• 18 September 2002, Kristol promised: a war in Iraq "could have terrifically good effects throughout the Middle East".

• 21 November 2002: "We can remove Saddam because that could start a chain reaction in the Arab world that would be very healthy."

• 1 March 2003: "We talk here about Shiites and Sunnis as if they've never lived together. Most Arab countries have Shiites and Sunnis, and a lot of them live perfectly well together." Also: "Very few wars in American history were prepared better or more thoroughly than this one by this president."

• 5 March 2003: "I think we'll be vindicated when we discover the weapons of mass destruction and when we liberate the people of Iraq."

• 1 April 2003: "And on this issue of the Shia in Iraq, I think there's been a certain amount of, frankly, Terry, a kind of pop sociology in America that, you know, somehow the Shia can't get along with the Sunni and the Shia in Iraq just want to establish some kind of Islamic fundamentalist regime. There's almost no evidence of that at all. Iraq's always been very secular."

And of course there are also the immortal words of David Brooks himself, still available to anyone with a mouse and a computer who want to bother to take the trouble to look and see what Mr. Brooks actually said on the public record just a few years ago:

The Collapse of the Dream Palaces
Mass destruction of mistaken ideas.
APR 28, 2003

...
Now that the war in Iraq is over, we'll find out how many people around the world are capable of facing unpleasant facts. For the events of recent months confirm that millions of human beings are living in dream palaces, to use Fouad Ajami's phrase. They are living with versions of reality that simply do not comport with the way things are. They circulate and recirculate conspiracy theories, myths, and allegations with little regard for whether or not these fantasies are true. And the events of the past month have exposed them as the falsehoods they are.

In this dream palace, Bush, Cheney, and a junta of corporate oligarchs stole the presidential election, then declared war on Iraq to seize its oil and hand out the spoils to Halliburton and Bechtel. In this dream palace, the warmongering Likudniks in the administration sit around dreaming of conquests in Syria, Iran, and beyond. In this dream palace, the boy genius Karl Rove hatches schemes to use the Confederate flag issue to win more elections, John Ashcroft wages holy war on American liberties, Donald Rumsfeld, Paul Wolfowitz, and his cabal of neoconservatives long for global empire. In this dream palace, every story of Republican villainy is believed, and all the windows are shuttered with hate.

My third guess is that the Bush haters will grow more vociferous as their numbers shrink. Even progress in Iraq will not dampen their anger, because as many people have noted, hatred of Bush and his corporate cronies is all that is left of their leftism. And this hatred is tribal, not ideological. And so they will still have their rallies, their alternative weeklies, and their Gore Vidal polemics. They will still have a huge influence over the Democratic party, perhaps even determining its next presidential nominee. But they will seem increasingly unattractive to most moderate and even many normally Democratic voters who never really adopted outrage as their dominant public emotion.

In other words, there will be no magic "Aha!" moment that brings the dream palaces down. Even if Saddam's remains are found, even if weapons of mass destruction are displayed, even if Iraq starts to move along a winding, muddled path toward normalcy, no day will come when the enemies of this endeavor turn around and say, "We were wrong. Bush was right." They will just extend their forebodings into a more distant future. Nevertheless, the frame of the debate will shift. The war's opponents will lose self-confidence and vitality. And they will backtrack. They will claim that they always accepted certain realities, which, in fact, they rejected only months ago.
...

Because it is so much easier and infinitely more profitable to just to wish it all away, at no point in the last 12 years has Mr. Brooks ever taken back a single word he wrote during the Age of Bush. At no point has America's High Priest of Telling Other Journalists to Atone and Repent ever atoned or repented of his own loathsome actions.  At no point has America's Professor of Humility even acknowledged that his own words exist.

Instead, Mr. Brooks has contended himself with cashing the checks, taking the promotions, keeping right on with the hippie punching and just pretending that the truly despicable means by which he clawed his way to fame and fortune never happened.

Of course to pull of this an act of press-tidigitation this huge, Mr. Brooks would need pretty much the entire Beltway punditocracy to be in on the conspiracy.

Fortunately for him, they are.

Great takedown, DG. I am clipping it for safe-keeping. And a shout-out to the great Eric Alter who forever keeps the flame lit.

"... no day will come when the enemies of this endeavor turn around and say, "We were wrong. Bush was right."

Just thinking out loud here, but could that possibly be true because we were right and Bush was wrong?

When I taught Business at a local university the year which included 9/11, I drew a diagram of the cultural makeup of Iraq and led a discussion on the historical strife between the Shias and Sunnis (and sometimes the Kurds if they got in the way), and how Saddam Hussein had turned Iraq in a high-functioning country where both were represented (disproportionately of course) in its government. I ensured that the class understood the problems in Iraq as well as its modernity, which was largely destroyed by U.S. bombs, attacks, etc.

David Brooks possesses no particular education that I can discern and has proved himself merely adept at typing from a script he receives from those who don't want anyone to know the truth.

And he's very effective at what he's paid to do. I think it's almost humorous that people still think he, or Tommy Friedman, or Mary Matalin, or Bill Kristol, or any of the other intellectual misfits (to be kind), paid millions to pretend to report facts to the ignorant, need to be outed.

They're out. And the people who still take them seriously can't be reasoned with as they don't have the intellect or curiosity to understand how this situation evolved or needs to be changed.

It's good to be an agent of change, of course. But don't let the immensity of the task affect your emotional stability. It's too high a price for too small a return. And a shame to see good people driven crazy.

The world we swim in.

Decorated by these bottom feeders: toadfish.