How To Start An American Civil War 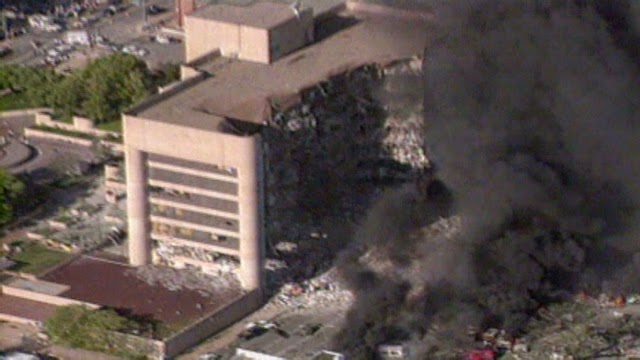 The Right has shut the federal government down because Freedumb!

The Right has nodded sagely as unarmed black men have been killed by cops.

The Right made a hero out of a mooching bigot because he and his lunatic pals responded to the cops coming to collect a tax bill by brandishing weapons and yawping about Liberty.

The Right been opposed any attempt at sane gun control in this country.

The Right fingers it's arsenal and mutters ominously about "The Blood of Tyrants" and "Second Amendment Remedies" every time it stubs its toe.

So does anyone doubt that the minute the Kenyan Usurper Race Baiter Muslim Brotherhood Uppity-Negro-In-Chief announces that Conservative Superhero Dick Cheney is going to be tried for war crimes, there would be an armed uprising in this country the likes of which we haven't seen since 1861?

Email ThisBlogThis!Share to TwitterShare to FacebookShare to Pinterest
Labels: torture

Let 'em try. Please, PLEASE let 'em try. This time we'll burn it all clear to the waterline, and probably set the Gulf on fire too...

Notice where the Federal Government has some of its largest military bases?

I cannot think of a more shocking, yet, fitting end to the Obama era than the indictment of Cheney. It would be perfect, really. But, like Redhand said, not gonna happen...

I don't think you are right. I do think they will wear out the entire earth's reserve supply of keyboards screaming their rage into the ether. But then, that is so therapeutic for them, and provides us with an innocent source of amusement.

You know that military they've been demanding we spend a half a trillion dollars on every year?
They do know that it won't be fighting on their side, right?

Given how many of that military's members come from that toxic culture, how can Din and others be so sure that a significant portion of that military wouldn't fight on the side of rebellion?

Especially if some foreign power or powers, seeing a chance AT LAST to disrupt Capitalist, er, USAmerican hegemony over the planet, decided to smuggle arms to the hypothetical rebels?

Though as Redhand and Bosma said, Obama will never indict Cheney, so we're all just indulging in mildly entertaining speculation here.

Actually, yes, I do doubt that.

Those who "say" the loudest seldom "are".

They are bullies and bullies are crybabies. They fold as soon as they're met with strength. They are neither stupid enough nor brave enough to actually follow through on their threats of rebellion.

In the November 4, 2008 elections, the Democratic Party increased its majorities in both chambers, President Obama had a Democratic majority in the legislature for the first two years of his presidency.

What did he do?

(The US)“Government is the Entertainment division of the military-industrial-[media] complex.” Frank Zappa

Clown (propaganda) division - FOX and most US media.

'Rage, rage against the dying of the light....' and I greatly admire you for doing so. And, treading on your hopes and dreams is not what I want to do.
But, 'Indict Cheney'.....tch tch tch.

It's good to know we have all these enlightened individuals here to tell us who's REALLY to blame.

Not the cabal of far-right jackasses who lit the Constitution and our standing in the world on fire, nor their paid stooges in our nation's right-wing media bullshti complex, nor the Colonial-Willamsburg-cosplaying idiots who dutifully stand astride history, arms outstreched to stop us from making even the feeblest effort to delay the destruction that the aforementioned cabal set rolling.

Nope. As usual, it's That Goddamn Negro's fault. As it always is to them.

He knows that any action, no matter how slight, will send the rightist knucklefucks into a froth unlike any known to date, screeching about how it's all payback and tyranny. Maybe they'll revolt, maybe they won't. But it won't be the REMFs who suffer when the pig people act on their fantasies. It'll be us. PBO knows it.

As for me? I'd love to see the Cheney junta indicted - but in the World Court, not in the US. This is a matter of crimes against humanity, and it should be dealt with properly.

and re: MftI's comment @ 10:10, yes, there are plenty of people in the military who come from the ranks of the Fauxnewsian Pig People, but aside from a few pants-pissing cowards who think they're going to start an insurrection against That Goddamn Negro with their buddies in the unit, they're actually pretty loyal.

And the Infowarsian belief of "they won't fire on us Real 'Murkin Citizen Patriots!!!1" is horseshit as well - mostly because it'd be likely that the gun-fucker neo-confederates would shoot first.

You totally nailed it as always! Thank you for giving voice to my rage.