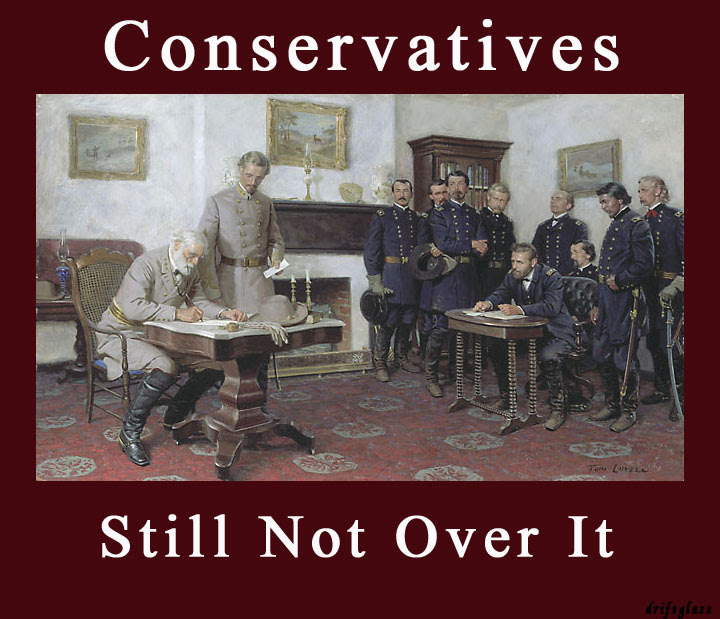 As his Confederacy was a being pounded to rubble, Jefferson David laid this curse upon the land:


“...It is for us, my countrymen, to show by our bearing under reverses how wretched has been the self-deception of those who have believed us less able to endure misfortune with fortitude than to encounter danger with courage. We have now entered upon a new phase of a struggle the memory of which is to endure for all ages and to shed an increasing luster upon our country. ...

...If by stress of numbers we should ever be compelled to a temporary withdrawal from her limits, or those of any other border State, again and again will we return, until the baffled and exhausted enemy shall abandon in despair his endless and impossible task of making slaves of a people resolved to be free.”

And what has the last half-century of Conservatism been if not the unclean, undead, voracious vampire spirit of the Confederacy rising up again and again to tirelessly lie, cheat, scam, shriek, suborn and otherwise "baffle and exhaust" those among the living who do not understand the nature of the enemy they face.
at November 24, 2014

"... until the baffled and exhausted enemy shall abandon in despair his endless and impossible task of making slaves of a people resolved to be free.”

To think he said that last bit with a straight face to his peers-- "Gentlemen" Plantation Owners. The irony meter was blown out way back then. I've always wondered.

For example, see Davis's wifes letter about his cowardice and false claims of heroism, sent to Blairs the week after his capture. Gotta see it to believe it.

That's just ONE of dozens of orginal documents that show a fundamentally different view of Jeff Davis and Robert E Lee.

To an astonishing extent, the my of an honorable principled South, rests squarely on Lee and Davis shoulders.

Did you know Lee's slave ledgers in his own handwriting show he bought women and children from bounty hunters - not just his own escaped slaves, but he bought humans that his hunters found in the North, that were living there free, until Lee got his hands and whip on them.

And Lee paid men to whip his slaves- - another thing his slave ledgers show.

There is just so much.

But of all the bullshit glossed over, are the killing sprees paid for by Jefferson Davis, 1855 on, where SOuthern leaders bragged out the ass about killing to spread slavery.

Here are two links -- one is Davis wife's letter, the other is about Davis killing sprees. Yes they are blogs, but the information in them is based on original documents.

Only the last half-century?

What has Conservatism, at least in the USA, ever been if not the unclean, undead, voracious vampire spirit of CAPITALISM tirelessly working?

The end of Reconstruction can be understood as the Northern industrialists making a deal with the Southern planters because of the two elites' mutual fear of the working classes.

But Ken Burns documentary on the civil war made no mention of these details about Davis and Lee. Burns also let a southern historian (Shelby Foote) provide the narrative of the confederacy. At one point Foote says that Nathan Bedford Forrest and Abraham Lincoln were the two greatest statesmen the civil war produced. Burns however does not mention that Mr Forrest was the founder of the KKK.

CM and Seeker point us toward an odd fact. To a remarkable extent, the losers were allowed to re-tell the Civil War from their viewpoint, in contrast to the aphorism that "the winners write the history books".

Again, after the Civil War, the Northern elite decided they needed their old adversaries, the Southern elite, as allies against the working classes.

In order to keep a critical mass of the white Southern working class from joining black Southerners and white Northern workers against the elites, the myths of white supremacy and of the nobility of the Lost Cause needed to be propagated--lest the rednecks realize that their ancestors who fought and died for the Lost Cause had served the planters as "useful idiots".

Umm, yeah, Ken Burns did mention NBF's founding of the KKK. He also noted that Forrest did a Buckley and backed away from his own creation in horror... though, Burns didn't exonerate him by any stretch of the imagination, either. To be accurate.

Do not remember where he does that? It is possible though given that it is a multi episode documentary. But there is this episode where Shelby Foote talks about a conversation he had with a descendent of NBF. That is when he calls NBF and Lincoln as two great statesman the civil war produced. If I were Burns I would have reminded the audience right then and there that Lincoln liberated the slaves and NBF founded the KKK.

Was that a great documentary?

I thought it was. Till I started reading SOUTHERN books, SOUTHERN newsapers, and SOUTHERN speeches, SOUTHERN documents, at the time.

I was flabergasted at what Burns just left out.

Not one word -- NOT ONE -- about SOuthern war ultimatums of 1861. Do you know the South made specific war ultimatums, after they seceded, but before Sumpter?

Yes, the Five War Ulimatums were amazing, but only amazing because we arent told -- and Burns never did -- about Southern leaders already declaring war in 1856.

US Senator David Rice Atchison, the guy that got Kansas Nebraska Act passed, left immediately for Kansas, and there started terrorizing, bullying, and later killing to spread slavery by force.

OH, and he BRAGGED of it.

Oh, and he BRAGGED repeatedly he was working for "the entire South"

Oh, and he BRAGGED he would not stop killing till he had slavery not just in the KS -N territories, but all the way to the Pacific Ocean.

Oh -- and this was common knowledge at the time.

You probably knew about Charles Sumner being beaten on floor of Senate - right? Every high school kid is taught that.

He was talking about David Rice Atchison -- the guy who got KS bill passed, then immediately went to KS and started his reign of terror.

For two days, Sumner spoke about Atchison and his partners by name.

Did you know that?

After SUmners beating, Atchison's use of Texas killers in Kansas showed Atchison wasn't slowing down. The terror continued.

Not one word about this in Burns documentary?

Hell, Lincoln got back into politics BECAUSE of what Atchison did!!

Why not mention that!?

Burns was duped by Foote, who adored Atchison and Jeff Davis. WTF Burns got guy, is beyond me. Probably because Foote seemed like a kind grandpa, He was one of the biggest liars and Southern apologist.

See this -- see what Burns left out.
http://civilwarkillers.blogspot.com/