Beware The Tingler: Glenn Greenwald, The Phantom Menace and The Present Progressive Tense 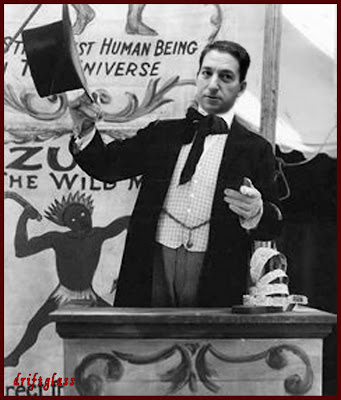 I think we will end the big stories in about three months or so [June or July 2014]. I like to think of it as a fireworks show: You want to save your best for last. There's a story that from the beginning I thought would be our biggest, and I'm saving that. The last one is the one where the sky is all covered in spectacular multicolored hues. This will be the finale, a big missing piece. Snowden knows about it and is excited about it.

We have now had a year of hints and teasers about the contents of the most famous ultrasecret stolen files in history.  Millions of files, collectively so dangerous they could “...cause more damage to the US government in a minute alone than anyone else has ever had in the history of the United States" and which purportedly lay out in detail the nuts and bolts and names and dates of a ubiquitous, omnipotent, omniscient, global surveillance superstate which, when revealed in its entirely, would dwarf Orwell's worst nightmares --

...I say this without the slightest bit of hyperbole or melodrama; it's not metaphorical and it's not figurative; it is literally true–that the goal of the NSA and it's five eyes partners in the English speaking world–Canada, New Zealand, Australia and especially the UK–is to eliminate privacy globally, to ensure that there could be no human communications that occur electronically, that evades their surveillance net; they want to make sure that all forms of human communications by telephone or by Internet, and all online activities are collected, monitored, stored and analyzed by that agency and by their allies.

That means, to describe that is to describe a ubiquitous surveillance state; you don't need hyperbole to make that claim, and you do not need to believe me when I say that that's their goal. Document after document within the archive that Edward Snowden provided us declare that to be their goal. They are obsessed with searching out any small little premise of the planet where some form of communications might take place without they being able to invade it.

And we have now also had months of Mr. Greenwald simultaneously promoting his new book and a rock-solid promise that the denouement of this tale would not only tie all loose ends together, definitively validate every spine-tingling assertion he has made to-date and bring balance to The Force --

-- but would be so spectacular! so startling! so hair-raising! that you may well shit yourself in shock and run out of the theater --

-- there to collide with other mobs running out of other theaters.


And now, today,  comes Mr. Greenwald's Big Reveal of the Most Epic Motherfucking Climax to the Greatest Story In Modern Journalism...

Between 2005 and 2008, five prominent Muslim-Americans had their emails opened and read by American intelligence services:

After a huge amount of pre-publication hype, Glenn Greenwald’s new capstone NSA story is out, and I find myself with little to say about it.

Greenwald has gotten his hands on a spreadsheet listing the email addresses of people supposedly subject to FISA surveillance, and he has identified five Muslim Americans whose addresses are on it. He has interviewed the subjects and found that they don’t acknowledge being legitimate FISA targets. He has noted that nothing about their public activities would give rise to an adequate FISA application, and he has noted as well that no charges were filed against any of them. After quoting an appallingly-bigoted former FBI official (who believes, among other things, that CIA director John Brennan is a secret Muslim) and an internal government email that uses a gross ethnic slur (“Mohammed Raghead”), he concludes that we’re dealing with COINTELPRO.
...

I suspect that over the next few days, commentators will try to mine the public record for disparaging information on the five people in question to try to justify the alleged surveillance. I’m not interested that game. I don’t want to smear anyone. I don’t believe in guilt by association. And it’s actually not important what might have been in a FISA application, only what actually was in it. Until someone has some has some information about, there’s really not much to talk about.
...

Blinded as I am by the spectacular multicolored hues of this revelation, I too have little to add to the story, other than to say that, if true, it is a travesty that these men had their privacy violated (although even after months of preparation, The Intercept article somehow never manages to get around to mentioning whether warrants were issued or not), and that I hope the FBI official who slurred Muslims was sacked.

A travesty, and well-worth reporting...but nothing that remotely lives up to the breathless hype which the peripatetic Mr. Greenwald has been pushing all over the face of the Earth:


Finally, and nit-pickily, I would also like to mention to the editors at The Intercept and the many other sites which are helping to promote this story (emphasis added):

Meet the Muslim-American Leaders the FBI and NSA Have Been Spying On.

A verb construction (made up of has/have + been + a present participle) that emphasizes the ongoing nature of an action that began in the past and continues in the present.

and the Past Tense --

A verb tense indicating action that occurred in the past and which does not extend into the present.

when reporting on events which transpired between 2005 and 2008.

My money had been on sekrit muslim-american internment/re-education camps somewhere in the Dakotas.

That's present perfect progressive. It indicates an ongoing action that has been perfected, i.e., completed.

Wasn't that about the same time Greenwald was illegally recording witnesses on behalf of Neo-Nazis?

Well, I'm sure none of that icky bad stuff is happening anymore, because . . . well, because! There, I've run rings around you logically, wherein the absence of evidence is evidence of absence.

Some folks at LGF tweeted your link to this story. Yeah!

*yawn*
Same jealous rant.
Same jealous cant.
Jeebus can we get back to your forte?
This is definitely not it.