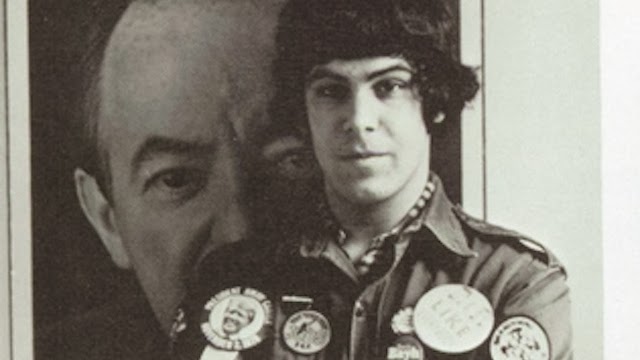 It's about Michael Ignatieff, who entered politics late, did soul-crushing things to win, eventually lost in a landslide, and then wrote a book about it.

Like a lot of his columns, this one reeks strongly of Brooks obliquely writing about himself. Or about how he sees himself: a noble man who got caught up in an unsavory profession for the very best of reasons and now is trying to cut a different trail for himself (without actually changing or taking responsibility for anything.)

Which is bunkum, of course.

Mr. Brooks dove into the business of slagging Liberals and touting terrible Conservative ideas with all of the of a young Henry Hill --

-- and only got kittenish about it once the entire Conservative movement blew up in his face.

And so we get a book report.

Except for the hilariously wrong, college-brochure language Mr. Brooks -- Professor of Humility at Yale -- uses to describe the ivied life within academe:

In academia, the goal is to come up with a timeless truth. In politics, timing is everything, knowing when the time is ripe for a certain proposal. In academia, the idea is to take a stand based on what you believe; in politics, the idea is to position yourself along a left-right axis in a way that will differentiate you from your opponents and help you win a majority.

In academia, a certain false modesty is encouraged; in politics, you have to self-dramatize a fable about yourself — concoct a story to show how your life connects to certain policies. In academia, you are rewarded for candor, intellectual rigor and a willingness to follow an idea to its logical conclusion. In politics, all of these traits are ruinous.

I have worked within the Hallowed Halls, and have many friends and colleagues who have worked there too.  And other than describing a tiny percentage of The Academic Elect -- the tenaciously tenured few who occupying the ippy, tippy, top to the university food chain and who, like Mr. Brooks, enjoy professional lives completely insulated from the consequences of saying and doing very stupid things -- I have no idea what the fuck Mr. Brooks is talking about.

The overwhelming majority of jobs in the academia are just like any other job: tenuous.


Which segues nicely into the sweetest insight to be found within Mr. Brooks' entire, dull book report.  It comes when Mr. Brooks -- through the vessel of Michael Ignatieff  -- describes his own worst-case scenario: a nightmare world in which his livelihood suddenly becomes dependent on other people judging his actual performance:

He went through each day completely dependent on the reaction of other people, minute by minute, second by second, to validate his performance.

Yes, ladies and gentlemen:  David Brooks' moment of maximum pantsless-in-public horror is what the rest of us call, "Having a job":

"In academia, a certain false modesty is encouraged" did Brooks really write that?

For those of us who don't have sinecures handed over in reward for years of faithful service to the cause, academia is a dog eat dog battle for survival. You are out there every single fucking day, selling your ass for all you are worth, lest some newly minted PhD comes along to eat your lunch and you find yourself teaching six courses of bonehead english at a thousand dollars a semester to pay for cat food in your roach motel apartment.

Only vestiges remain of the life of the mind. Saint Reagan started the program of devolving America into Kazakhstan with nukes and a five ocean navy, and we have marched so far down that path that we may well have passed the point of no return. All the glitzy toys of Silicon Valley won't save us now.

Brilliant, DG and Horace! Beautiflly written and of course totally on point. I would not wish Our Mr. Brooks' karma on anyone, except Mr. Brooks and just about everyone else in the mainslime media.

The thing I like about Ignatieff is the fact that he has a Hungarian wife named Zsuzsanna. See, I have a good friend of Hungarian ancestry named Zsuzsa, who gave me a barrel of plastic monkeys for Christmas, causing me to be shamelessly biased toward anyone with "Zsuzs" in their name.
While watching DFB answer to an actual boss might be briefly entertaining, I would quickly tire of it, as I was taught as a child not to torture dumb animals.

Horace--no battle for Ignatieff, though, who has part-time low-stress gigs at U Toronto and Harvard and gets book contracts passed out to him like Halloween candy.