The Iron Loony Steps Down -- UPDATE 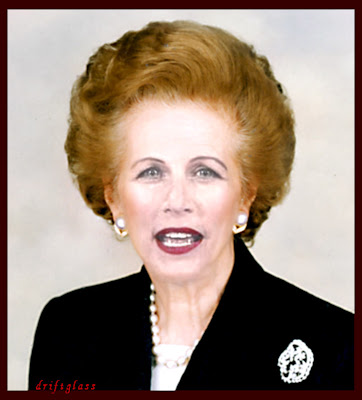 The Mad Queen of Jesusland gives up quest for the Iron Throne.

From the Chicago Tribune:


Ardent conservative Bachmann to not seek re-election to Congress


WASHINGTON (Reuters) - Michele Bachmann, the firebrand conservative 2012 presidential contender, announced Wednesday she will not seek re-election to the U.S. House of Representatives.

Bachmann, a Minnesota Republican, did not rule out another run for the Republican presidential nomination.

She said in a video posted on her campaign website that four two-year terms was enough time for anyone to serve in the House. She gave no other specific reason for not running for a fifth term.

Bachmann faced a House challenge from Democrat Jim Graves who came within one percent of beating her in 2012. But fear of a difficult race in 2014 was not her reason for leaving the House, she said in the video.

Bachmann's campaign for the 2012 nomination, which centered around charges that President Barack Obama was putting the U.S. "on the road to socialism," brought her wide attention. But much of it was negative thanks to regular misstatements of fact.
...

For the record, I believe she's not quitting Congress so much as she's changing her revenue model.

Also for the record, the Photoshop above dates back a couple of years when some long-forgotten wag was trying to get the public to draw obvious, harsh comparisons between Congressnutter Bachmann and a soon-to-be-deceased former British PM.

UPDATE:  Via Charles Pierce I see that one of the Voices of Jesusland has finally picked up on

that long-forgotten wag's brilliant 2011 comparison of Congressnutter Bachmann to the then-soon-to-be-deceased former British PM, but as is always the case with Conservative headcases, has gotten it all entirely ass-backwards.

Well, if her run for the White House was any indication, she'll be replaced by a secessionist.

Enjoy the rest of your day.

Which will it be?

Just clears a spot in the field for the next crop of guanopaths.

Unfortunately, given her district, it's going to be filled with a pretty good loony also. The only chance the Dems had to pick it up was with Ol' Crazy Eyes, and even then it would have flipped in the next cycle anyway, the district is THAT gerrymandered.

I guess for me, it doesn't count as a win so much as a draw; Bachmann served as such a perfect example of the Republican Crazy. A campaign would have been a great time to fully latch her lunacy to the GOP on a national basis.