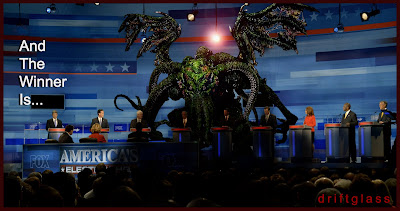 
Perry is done. Toaster strudel. Being too much in the bag to remember how to count to three (no kidding)  (video has been removed for reasons) was apparently too much for even the meatsticks in the audience who applauded every bleeding "Faster Pussycat! Kill! Kill!" gobbet they were thrown by the red-meat Pez dispensers on stage.

For intelligent citizens, this story long ago stopped being about the freaks and cult-hustlers who have risen to the top of one of America's two major political parties; the story is about the truly stunning depravity and pig-iron-ignorance of the millions of Pig People who put them there.

What you are witnessing is the apotheosis of the Southern Strategy crossing streams with Reaganomics. If you helped author this catastrophe, you should spend your days thanking God you haven't been put up against the fucking wall by now.

And if anyone has a right to be pissed at the sight of Perry finally disappearing up his own ass in a puff of Jack Daniels, it would be Michele Bachmann. Because as deeply nuts as that gorgon is, she actually won something -- the Iowa straw poll -- after which she went Full Ginsburg across the Sunday Morning Mouse Circus. And then, less than 48 hours later she was unpersoned out of orbit, not because anything at all had actually changed, but because -- only because -- a few dozen rich, corporate-owned Villager Beltway douchebags decided that the rich, corporate-owned white Christian conservative guy from Texas was better for their fucking ratings.

But other than Perry going tits-up, tonight changed nothing.

**(To serve you better, the other 16 typos I strategically embedded throughout this post to honor Rick Perry's mighty Foster Brooks impersonation have also been removed :-)

Email ThisBlogThis!Share to TwitterShare to FacebookShare to Pinterest
Labels: Debates

I notice that the Lincoln Memorial weeps real tears at night these days.

Goddamn that's some good writing right there. Perry disappearing up his own ass: priceless.

A typo, though: Pukes think history began in January 2009.

I'd call Mr. Romney "the Highlander", but I don't ever remember Christopher Lambert standing around while his enemies chopped THEIR OWN HEADS off.

I'd say there's a bunch of typos. You might want to proof read this one Driftglass! Never drink and blog. :)

Yes, this was so so bad.

But I can't get my mind off of Romney's performance last night, either. There was something so disturbing about it until it finally struck: Does Perry's vapidness exceed Romney's terminal ingratiation complex?

I honestly don't think so.

As bad as Perry performed, and it was very very bad, I couldn't help but watch the grinning Romney as if he were some chuckling frat boy cheering on a gang rape at the Wednesday night "Hump Day!" kegger.

Holy fuck! What a slate of bat shit insane losers.

Due to the drinking game, that almost knocked me out of the debate in the first few minutes.
~

About Cain's retort to the harassment allegations: