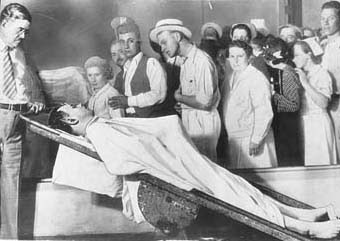 Or, as we would describe it today, the United States government has assassinated a US citizen without due process.

Twenty-three people died of the heat on this date, but the death that drew the most attention was that of a 31-year-old Indiana man who, on his birthday a month earlier, had been declared Public Enemy No. 1 by the FBI.

At the time of his death, handsome, daring bank robber John Herbert Dillinger was as famous as anyone in America.In little more than a year, Dillinger had robbed several banks, escaped from two jails, eluded police traps and killed at least one police officer.

Despite Justice Department rewards totaling $15,000, he had lived an unnoticed and relatively normal life on Chicago's North Side. He often had dinner at the Seminary Restaurant at Lincoln and Fullerton Avenues. He went to a Cubs game at Wrigley Field and pulled one of his trademark bravado stunts by saying hello to his lawyer, who was chatting with a police officer.

Dillinger's girlfriend was a red-haired waitress named Polly Hamilton. Her landlady, Anna Sage, who was to become known legendarily--though inaccurately--as "the Woman in Red," was Dillinger's confidant and knew his identity.

In the heat of that July, movie houses advertised that they were "air-cooled." Perhaps that's what made Dillinger decide to take Hamilton and Sage to a movie that evening. If so, there were 24 heat-related deaths that day.

Dillinger told the women he wanted to go to the Biograph Theater on Lincoln Avenue where " Manhattan Melodrama," starring William Powell and Clark Gable, was playing. Sage told the law.

Sage, who had come to America from Romania as Ana Cumpanas, was a successful operator of houses of prostitution. Deportation proceedings had been started against her, but when Dillinger admitted his identity to her, she must have thought she had been given a ticket to remain in this country.

Dillinger and the two women--Sage in an orange skirt that looked red in the light of the marquee--left the Biograph about 10:30 p.m. More than 20 law-enforcement officers were waiting. As the three walked south on Lincoln, Dillinger realized he was walking into a trap and bolted for the alley. Shots rang out. One bullet hit Dillinger in the back of the neck and exited through his right eye. That shot killed him.

Sage died in 1947 in Romania, to which she had been deported.

This fantasy that the United States government has never killed a bad guy who was a US citizen "without due process" is very strange.
at October 03, 2011

this is an odious comparison. Dillinger had long, long record; charges, convictions, jail-time; due process! he was charged with murder; he was armed and in flight when he was killed; some sources say he pulled his gun.

In contrast, all we have is friggin' hearsay against awlaki. The White House still refuses to provide any evidence; they refused him representation by legal counsel.

So many liberals owe Dick Cheney apologies these days.

I think there's a bit of a difference between a drone attack on an unsuspecting citizen half a globe away in a country we are not at war with...

and a guy who's going to movie theaters right on your front door.

Dillinger wasn't so much assassinated, as he was gunned down by a slightly over-zealous constabulary while fleeing his arrest.

Never met Dillinger, but always admired him. Anyone who robs banks is okay in my book.

Wake me up when you're ready.

And righteous, to boot.

I believe that photo is the source of the myth of Dillinger's dick. It's a handle.

Dillinger was shot while being "apprehended" even if the whole thing was a set up. That's a world of difference. And besides, in 1934, they were grabbing Black dudes and stringing them up by the scores. Why not raise that ol' tradition too? Hmmm?

I figured you were better than this, D.

Wow, such bullshit. As Compound F points out, he was formally charged, actively in flight, and according to some witnesses pulled his gun.

But put that aside. Let's say that in an alternate history, Melvin Purvis sets a bomb to blow him up while he sat in the Biograph, and does so without a warrant or probable cause or any legal oversight. Is that the end of the Fifth Amendment? Sorry folks, it died with Dillinger, done in by the Lady in Red?

Lincoln waived habeas, so bye-bye habeas. FDR rounded up Japanese-Americans, so liberals should shrug at concentration camps. It's so easy to come up with examples like this. Are you sure you want to argue that because the US Government has done something wrong in the past, it's no biggie if it does so now?

Really? You are really arguing using that as a standard now?

Who are you, and what have you done with Driftglass?

"This fantasy that the United States government has never killed a bad guy who was a US citizen "without due process" is very strange."
Bad guys, good guys--doesn't make much difference sometimes. Ask the kids at Kent State.

Oh the outrage in the comments above...intoxicating, isn't it, to live in a state of perpetual moral superiority?

The point, as I take it, seems to be that "our" hands have never been clean, and certainly are not now. We have never been a nation of "due process" and we are not now. And it is hardly "no biggie" that such things continue to be perpetrated in this country. The reason it is "so easy" to come up with such examples as Dillinger and Lincoln's suspension of Habeus Corpus, and the Japanese internment camps (and on and on) is that we have long been (and are now) a nation of sanctimonious frauds who pay lip service to ideas that we do not actually believe in (as evidenced by our history) and have never believed in. We put our hands over our hearts, sing the national anthem before games, and then look to Jesus, or the Flag, or [insert object of veneration here] in order to validate ourselves in our own feelings of moral rectitude and kindly (though just) intentions.

We are, in short, full of shit. Always have been.

Seems a fairly easy point to have derived from the post. Though when in a rush to deliver a delicious payload of moral condemnation, I can see why it one might miss it.

...intoxicating, isn't it, to live in a state of perpetual moral superiority?

Why, it must be almost as intoxicating as living in a state of perpetual "realist" intellectual superiority, no?

So let me get this straight: Any outrage committed in the past automatically excuses an outrage taking place in the here-and-now? For instance, since we enslaved people in the past, anyone who objects to wage slavery now is just indulging "their own feelings of moral rectitude"?

By that reasoning, 99% of the topics on which driftglass practices his own inimitable brand of high dudgeon are just self-flattering exhibitions of his moral superiority.

"Any outrage committed in the past automatically excuses an outrage taking place in the here-and-now? For instance, since we enslaved people in the past, anyone who objects to wage slavery now is just indulging "their own feelings of moral rectitude"? "

Again, No. This is not--as I take it from the original post--a question of "excusing" anything. Nothing is being excused. It is the opposite. We, collectively, are being condemned. All of us. Even those of us who are aghast at the Obama Administration for their recent actions. All of us. It seemed a rather harsh post to me, not an effort to excuse anything.

I see the other commenters are outraged, simply *outraged* by your comparison, DG.

I have to say: When I heard the first wingnut complaining that Obama had killed Alwaki my reaction was "Jesus CHRIST! Obama's killing *terrorists* now! What is he going to do next?!?"

This is just proof that the man can't catch a break no matter what he does.

And for the record, I happen to agree almost entirely with the rest of the DG/BG analysis that Obama is a tool of corporations/wealthy elites, a good, moderate Republican, more conservative than Nixon, etc., etc., etc. It's just that he's still light years better than the deranged New Confederacy, the Party of Hate -- the GOP.

This is a very solid comparison. Thanks for pointing it out.