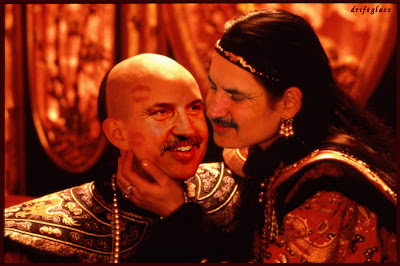 The Return of a Man Called 'Stache

GOP swine were out of force today, fiercely on-message: from Republican Congressman Paul Ryan yapping about taxes and over-regulation, to Herman Cain and Newt Gingrich doing their "Dodd-Frank and taxes on business are too damn high!" ebony and ivory, to Republican Congressman Aaron Schock yapping about taxes and over-regulation and the damn EPA...the Mouse Circus today was a fucking wasteland.

With one notable exception: Jesse LaGreca -- "...the only working class person you're going to see on Sunday news, political news... maybe ever." -- was a bright spot.

...Newt Gingrich calling for a Congressional witch-hunt against judges who Newt Gingrich doesn't like was unsurprising.

...George Will's doddering old bag of puckered Gilded Age venom routine about how the dirty hippies on Wall Street are exactly the same as the dirty hippies who delivered Murrica to Richard Nixon was 100% predictable.

...and you could have seen Wall Street Journal train-wreck Peggy Noonan's assessment that main difference between the Teabaggers and the Occupiers is that the Tea Party "arose spontaneously" coming from orbit.

And so my attention turns once more to the worst writer in American Journalism who repeated the only column he ever "writes" anymore for the umpteenth time:

...
Neither party is saying: Here is the world we are living in; here are the big trends; here is our long-term plan for rolling up our sleeves to ensure that America thrives in this world because it is not going to come easy; nothing important ever does.

What is John Boehner’s vision? I laugh just thinking about the question. What is President Obama’s vision? I cry just thinking about the question. The Republican Party has been taken over by an antitax cult, and Obama just seems lost. Obama supporters complain that the G.O.P. has tried to block him at every turn. That is true. But why have they gotten away with it? It’s because Obama never persuaded people that he had a Grand Bargain tied to a vision worth fighting for.
...

There is absolutely no evidence of this.
At all.

Or, to put it in vocabulary of GOP front-runner Herman Cain, once again Tom Friedman doesn't have any "facts" to "back this up".
Instead, any fair reading of the last three months or three years or 30 years proves exactly the opposite: that while Tom Friedman has been busy trotting the globe gleaning the opinions of miraculously-pro-Tom-Friedman cabbies in Hyderabad, hawking his awful books to gullible CEOs and giddily sucking China's dick, the American Conservative Movement -- backed by literally billions of dollars worth of ultra-Right Wing religious, teevee, radio, publishing, political and think-tank infrastructure -- has been patiently engaged in a Long March towards fascism.
They built a Base that is completely impervious to facts and reason. They have built a massive echo chamber where contrary opinions simply die in the the doorway. They have muscled their opinions onto of the timid, centrist, "we don't want no controversy" heart of virtually every media conglomerate in America.

And for the last 2.5 years, President Barack Obama has deployed every tool in his toolkit to forge common ground with these degenerates, up to and including selling out core Democratic principles in one misbegotten attempt after another to sue these traitors for peace.

This is fact. Clear, unambiguous fact.
And the complete denial of this single, gargantuan fact that sits squarely at the center of our comatose politics is that which Sherlock Holmes famously referred to as “the curious incident of the dog in the night-time.”
"But", the inspector points out, “The dog did nothing in the night-time.”

"That," Holmes replies, "was the curious incident.”

Because the dog -- the watchdog -- should have been doing something: the dog should have been barking its damn head off. And yet, as people were committing a crime right under its nose, the dog remained -- and remains -- conspicuously silent.

Which brings us back to the Mustache of Understanding:

To me, the biggest protest in the country today is that when the Tea Party insanely blocked any G.O.P. participation in a Grand Bargain that involved taxes, most Americans were silent. Why? Because they didn’t think Obama was offering a big plan from his side, either — one that rose to the true scale of our problems and aspirations, one that would push us out of our comfort zone and make us great.

What makes Friedman's now-weekly recycling of his ludicrous Centrist lie in the op-ed page of the New York Times a matter of some interest is not the substance of the lie itself, but the yawning, media-wide abyssal silence in its presence.

I mean, it the lie itself is so...infantile. So comically and cosmically stupid on its face. So inept. So laughably absurd.

And the writing the lie comes wrapped in is just so god damned bad.

And yet this ambulatory FAIL and well-lubricate tool of global capitalism keeps plodding implacably on. Fawned and feted so consistently and in such dramatically inverse proportion to the accuracy of his message and craft with which it is delivered that Tom Friedman simply stops being the story, and the question of why everyone else permits him to get away with it becomes so paramount that I begin to wonder what exactly Friedman's relationship is to the New York Times is.

I mean, does he pay the Sulzberger family to let him squat over their op-ed page once a week and pinch off another steaming loaf of Fake Centrism?

And if so, how much?

UPDATE: David Brooks chimes in with his brand of the same nonsense.

Bless ya, Drifty. Hope the fundraiser's going well. Stuck my little bit in the tip jar this morning. Looking forward to being in your toddling town this week.

That's perhaps the biggest media crime of all: that silent dog.

"What outrages? What crimes? What mass poverty? We don't notice anything amiss.... Nothing to see here, folks, everything's fine, move along.... La la la, We Can't Heeear You...."

(And if we don't hear it, then in the whole bubble-world we created, that tens of millions tune into and believe, it simply doesn't exist!)

The media reaction to Occupy Wall Street St. is thus dictated absolutely by the ironclad logic of their virtual world:

"I'm sooo confuuused. Whatever could they possibly be asking for?"

You know God Damn Well what we want.

Jail The Criminals.
Tax The Rich.
Use the proceeds to rebuild American infrastructure and put people back to work!

Please forgive a dose of very old school process examination: you've GOT to proofread these things before you post them (a good half-dozen errors in just this post). What you are saying is far too artfully phrased to be kneecapped by that sort of thing.
Thank you for everything you do, and I'm joining the proud ranks of the podcast contributors today.

CapD,
Welcome and thanks.

Matt,
You're right, this was too sloppy. I was literally falling asleep as I assembled it and should have left it until I was sharper.

Driftglass is being kind to Friedman by picking quotes in which the Mustache makes some sense. Such as: That it helped the Tea Party that Obama seemed lost and didn't have a vision worth fighting for. I, too, cry at Obama's lack of vision. Friedman's book calls for a New Centrism, an idea that Driftglass rightly trashes (Driftglass deserves great credit for beating the drum on this), but the Friedman quotes in this post don't say Centrism.