The Man Who Mistook His President for a Hat 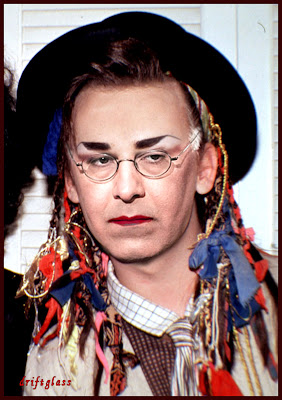 Yes, I’m a sap. I believed Obama when he said he wanted to move beyond the stale ideological debates that have paralyzed this country. I always believe that Obama is on the verge of breaking out of the conventional categories and embracing one of the many bipartisan reform packages that are floating around.

...
So the White House has moved away from the Reasonable Man approach or the centrist Clinton approach.

It has gone back, as an appreciative Ezra Klein of The Washington Post conceded, to politics as usual. The president is sounding like the Al Gore for President campaign, but without the earth tones. Tax increases for the rich! Protect entitlements! People versus the powerful!
...

because he wanted President Obama to stay in Centrist Neverland, playing Very Serious Moderate Pirate games with him and Tinkerbell

The president’s goal in 2012, I suggested, would be to try to paint himself as the moderate bipartisan grownup, and dismiss the Republicans as extreme, intransigent, and hyper-ideological.

Based on the actual details of the deficit plan that the administration just released, though, I would like to retract that analysis. Between the size, scope and design of the tax increases and the skimpiness of the entitlement reforms (nothing on Social Security, minimal tinkering on Medicare), it seems that the president will be running for re-election as Nancy Pelosi instead.
...

and all the other bloated, corrupt and inexplicably still-employed

Barack Obama is careening down the wrong path towards re-election.
He should be working as a president, not a candidate.
He should be claiming the vital center, not abandoning it.
He should be holding down taxes rather than raising them.

Lost Boys, forever and ever...

...and then, one day, the President had to finally face the very ugly fact that the GOP -- Our Mr. Brooks' GOP -- is actually completely mad, intractably evil and deeply committed to annihilating what's left of our country and laying their fascist eggs in its still-warm corpse.

Which at long last compelled the President the leave Centrist Neverland, at least for a moment.

Which, in turn, reduced Our Mr. Brooks to weeping hysterics.


The Right -- the same Right which the charter of Our Mr. Brooks' Centrist Neverland says must be endlessly appeased and compromised with...right up until they shit all over you...after which their psychotic intransigence should be met with ever greater acts of appeasement and compromise...forever (or "pre-compromise, followed by acquiescence to right-wing priorities") -- predictably ate Our Mr. Brooks alive.

Shorter Brooks: “Please just love me like I love you, Barack. I forgive you — come back!”

This is an unseemly column, where Brooks attempts to prove he’s not really sap, by declaring his unending sapitude. But the truth is, “Obamaism” was never anything more than a campaign ploy to earn the trust of people like Brooks and Peggy Noonan and Chris Buckley and countless others who should have known better.

Noonan has manned up. Buckley has too, sort of. Brooks, however, still sounds like a Shirelles song every time his man comes around. He’d sound more manly if he’d change his tune to that of a woman scorned.

No one in the media labored as hard to bolster Barack Obama as a candidate and defended President Obama more strenuously than New York Times columnist David Brooks.

But now Obama is galloping leftward.
...

But that was based on nothing more than wishful thinking and sharply creased pants. Now Brooks is reduced to throwing a bouquet at the feet of the Republicans, conceding that “at least Republicans respect Americans enough to tell us what they really think. The White House gives moderates little morsels of hope, and then rips them from our mouths. To be an Obama admirer is to toggle from being uplifted to feeling used.” It sounds like Brooks might need some grief counseling. He’s lost his idol and his credibility.

"Obama didn’t rise above the petty politics we have come to expect out of Washington. Instead he elevated petty politics. It turns out, Obama wasn’t different from any other politician that tells us what we want to hear to get elected, and then does the opposite.

Instead of real tax reform, Obama goes back to the same old “tax the rich” mantra. When reality shows that we already tax the rich enough, and they already more than pay their fair share.

-- do you really need to be told that the author ( the extra-perky "TexasSparkle" Kathleen McKinley) is a "conservative activist" who "blog[s] at The Houston Chronicle, RightWingNews, Newsbusters"?

"The Atlantic"'s still inexplicably extant Megs McArdle who deepens every darkness by throwing her "light" at it:

After a day, I think it's safe to say that the response to Obama's deficit reduction package has been rather hostile on the right. David Brooks sounds positively anguished:

We can argue over whether he's [Obama] been forced to this by those darned intransigent Republicans, but really I'd rather not...

Of course you'd rather not, Megs.

We’ve known it for a while, David. My question: Is this a real breakthrough, or will he lapse back into rubeitude at the sight of sharply-creased pants?

David Brooks Admits He Is An ‘Obama Sap’
Alternative headline: David Brooks has lost that lovin’ feelin’ for Obama.
...

Read the whole thing. It was clear years ago that Brooks was a sap for placing so much faith in Obama due to the perfect crease in his pants. Punditry doesn’t get more shallow or less serious than that.

As for Obama, there was much speculation that the mid-term shellacking would cause him to moderate and move to the middle to position himself for re-election. I never saw things that way; there is no evidence that either the president or his close advisers have any moderate tendencies or instincts at all.

(Typical Comment: Brooks and his ilk, like Peggy Noonan, didn’t see Obama as a rigid left wing ideologue because they DIDN’T WANT TO SEE IT.

To most of us, it was as obvious as the nose on his face. Between his past, his close associations with extremist radicals, his lack of an academic record, his voting record...)

David Brooks is a Sap

Poor fella, despite being smacked in the face by reality, day in and day out, David Brooks still believes in President Obama, or at least he believes in the Obama he fell in love with. Now he calls himself a “sap.”

Welcome to the real world, Mr. Brooks! Living life under liberal policies isn’t a pleasant reality, is it? Even though much is said by those on the left about how much they care about the “working class”, it isn’t genuine or sincere. It never is.

New York Times columnist David Brooks, one of the early right-of-center luminaries to fall madly in love with Barack Obama, finds that the spell has broken. It appears that the president's recent jobs plan was a crease too far...

And, finally, a depressingly representative sampling of comments from The Gateway Pundit:

Liberalism IS a mental illness, based upon idealistic emotions, and for the most part, a lack of basic reasoning and analytical skills, particularly when they ignore facts inconvenient to their worldview.
+++

Dump obummer into the dumster, where he and his mooching family below! CAN”T WAIT until he’s evicted.
+++

Nope. You are an ahole with a pulpit crafting words a false god-ism. You took a radical left community organizer and his handlers and made them royalty.
For this, you should resign.
+++

Obama can no longer move the agenda forward to establish absolute dominion of Satan’s counterfit kingdom.
+++

David Brooks. . you are not a sap. . .you are an idiot!
A Loser like President Zero!
Incompetent, Inept, Inexperienced. . . and radical too!

Thank goodness Andrew Sullivan was on hand to give his Conservative comrade-in-arms a soothing, soulful reacharound:

He's venting at Obama today for finally absorbing the ineluctable fact that the current GOP will never, ever support increasing government revenues, and thereby cannot get to the Grand Bargain so many of us want...

I agree with David that Obamaism matters; but I don't think Obama has treated us all like saps for proposing a second stimulus now and less radical ($3 trillion) debt reduction later...

...To blame Obama for this seems absurd to me - and is only in the column because David is leerier of saying what needs to be said: that the current Republican party is a radical, extremist, reckless force that is far more concerned with defeating this president than in reforming the country on bipartisan lines.

No, Mr. Sullivan, the word you are looking for is not "leerier". It is "liar".

Our Mr. Brooks is a liar.

Or he is suffering from a case of Wingnut Agnosia

Agnosia (a-gnosis, or loss of knowledge) is a loss of ability to recognize objects, persons, sounds, shapes, or smells while the specific sense is not defective nor is there any significant memory loss.

so debilitating that he needs immediate medical attention.

Or perhaps it is a simply that, long ago, Our Mr. Brooks sold his soul and took the Establishmentarian King's Shillings.

His service has been dutiful and profitable: a long, craven, jellylike quiver from one conventional wisdom goalpost to the next, always within the protective biosphere of Centrist Neverland. And at each of the Station of the Broderite Cross he has paused to praise the whichever Serious Person -- John Thune, Paul Ryan, whoever -- was on special that week, and to bark at the Dirty Hippies.

This week, the President was forced to very, very reluctantly admit that the Dirty Hippies might just have actually had a point all along, which according to the terms of Our Mr. Brooks' gold-plated servitude meant he needed to be barked at.

This arrangement has evidently made the tiny coterie of Upper East Side zillionaires to whom he targets every one of his syllables happy enough with their pet scribe to permit him to keep his excellent job despite having no visible talent or conviction beyond his ability to projectile vomit Stale Beltway Homilies further than anyone else.

Which means he's all yours, Mr. Sullivan.

I would love a to a Sunday Show where they hook up all the guest to lie detectors, just so that we know which ones really believe this sh!t and which ones are pandering whores.

John said...
This comment has been removed by the author.
3:16 AM

Oh my, this has to be one of your best yet, picture and prose.. tip of the hat!

Poor Brooksie... First he had to admit that the party that gave him so much comfort and prestige has turned into a pack of rabid dogs. Then his hope for the "centrist" Obama has deserted him, too. He's so broken-hearted that he just had to let it out...

So now, of course, all of his fellow travelers are throwing him to wolves because he's weighing down the sleigh. The interlopers are coming for him but, somehow, I think he will survive.

As long as the "Centrists" need someone to peddle their mendacity, Brooksie will have a job. Such a shame.

he president’s goal ... would be to try to paint himself as the moderate bipartisan grownup...

Americans don't want a "grownup". The Right wants a lunatic, sane Americans want a Leader who will FIGHT for and with them.

Ask the families of insane people how they deal with them.

1) Obumma is in his glory. He can spout all exalted manner of "progressive talk," all day long, knowing full well that NOTHING can possibly come of it in congress.

2) As to terminally perky Ms McKinley: given historically low tax rates on the rich, how can "tax reform" be anything BUT tax increases for these pathologically greedy toads?

That picture is worth a thousand words! (Hopefully not Brookie's)

this is a news blog..