The Adventures of Baron Grifthausen -- UPDATE 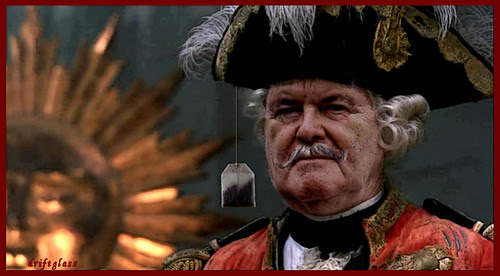 "Lying is the Song of the Streets"

Of course Newt-n-Calista-n-Jebus, LLC are "running" for President.

Of course they are.

How could it be otherwise?

Although many on the active, political Right may excel in individual events, there is no one who dominates the Conservative Moral Delinquency Decathlon like the human disaster area that is Newt Gingrich.

No bigger liar than Newt.

No bigger fraud than Newt.

No bigger exemplar and practitioner of the Science of Slaughtering Civilized Discourse for Partisan Gain than Newt.

No bigger hypocrite than Newt.

Also too, Newt has not held elected office since Ally McBeal was on the air.

Now over in the Better Universe, Newt Gingrich would be the national equivalent of a George Ryan or an Ike Carothers -- a half-remembered "Really? I though he was dead"-grade public embarrassment, laughing-stock, and the faint chuckle-inducing punch-line of a handful of mediocre political jokes.


But in this Universe, Newt is the GOP's Total Package, which is why – year after year – the Sock Puppets of Empire like David Gregory keep putting him back in the spotlight.

Because, we are told, Newt is Smart.

And within the Beltway Bell Jar (where a room-temperature IQ is clearly no barrier to rapid career advancement) ‘Smaaaart’ is like unto wizardry: a scary, half-understood power which, for Republicans, means that all sins are shriven and all inconvenient questions are pre-censored,

But when our Villager Overlords say "smart", what they really mean is "cunning": a lower, predatory trait which in this context simply means that, unlike a weepy waterhead like John Boehner or an half-bright, openly-scheming flunkey like Eric Cantor, Newt is capable of freestyle-lying in complete sentences without shitting his pants.

In other words, Newt lies effortlessly by reflex.

See, without sturdy verbal guard-rails and training-wheels delivered fresh and hot from the sphincters of Rush Limbaugh or Rupert Murdoch, most Conservative public figures get quickly lost and confused --

("Deer Preznit Kenyun ,
Please make the Dum-o-craps to stop saying how we voted for to gut Medicare!
The past is the past!
Yors in Christ,
the Party of God ")

-- and return to their factory-default settings: little wingbots running in terrified circles, yapping mindlessly about “Freedom” like HAL singing “Daisy” until their new Fox News software upgrades are installed.

Ah, but old-school mendacity innovators like Newt dare to swim out beyond the tightly-scripted, focus-group-tested Frank Luntz talking point tide-pools where most Republican douchebags spend their entire professional career, which both makes for good Imperial teevee, and gets at something important and about how Conservatives lie that we most Liberals have yet to wrap out heads around.

We waste our time waiting for the Right to find or grow or recover some semblance of a conscience.

That is never going to happen.

We keep waiting for some omniscient impartial referee (the Media) or righteous deity (the Masses) to step in and smite these fuckers.

That is never going to happen either.

And that while every mile of this steeply sloping trajectory to fascism is paved with a welter of individual, ridiculous lies, the road itself is greased with Biggest Lie of All.

The lie that “Both side do it.”

That “Both side are equally bad, equally wrong, equally to blame.”

And because this last and biggest lie is the one that makes it possible for both degenerates like Glenn Beck and whores like David Gregory to enjoy almost unimaginably great wealth and status, no one in the Establishment is ever going to allow it to be seriously challenged on teevee.

So, like a junkies turned loose on Free Crank Island, the Right (which has more than earned itself a choice parcel on the ash heap of history many, many times over) has instead found its worst impulses encourages and catered to.

Suddenly -- almost miraculously -- instead of being finally brought to book for the incalculable damage they have wreaked on our poor country, the Party of Lies instead finds that the Mainstream Media has liberated it from any fear of ever being held accountable.

Which is why the quality of the lies told by the likes of Michele Bachmann and Sarah Palin seem so bizarre to outsiders. Over and over again we are just stunned by their infantile construction and naked bullshittery. We are mystified by the obvious fact that the lies they tell are in no way canny or clever, That, in fact, they don’t hang together at all.

Because they don’t need to,

On the street, you'll find people like this –-- People who lie automatically. People who lie by reflex. And as they continually kick up this huge cloud of meaningless, ridiculous verbal chaff, it is important to understand that their expectation is never that any individual lie is going to be 'believed' (although they’re delighted when one is.)

No, compulsive, junkie liars are instead engaged in an ongoing game of Hide and Go Seek with anyone and everyone who would stand between them and their high. So even as they vigorously defend one lie until it falls decisively apart, a junkie’s primary focus is on preparing the next lie.

And this is terrifying aspect of the Modern Conservative Movement which many of us have yet to really face; the fact that A) they are dedicated to a truly grotesque agenda, and B) they are absolutely devoid of conscience when it comes to the means by which they enact that agenda.

The acid test is, as always, the Right's scuttling deference to hatemongers like Limbaugh, sociopaths like Beck and serial liars like Breitbart: no concertina-wire wall of lies -- no matter how thick or loud -- can obscure the fact that any movement that permits people like these to remain at its core has become something monstrous beyond redemption.

Down on the corner where the men are slinging rock, this behavior is called “the song of the streets.”

In prison, professionals once referred to it as “Ganser Syndrome”, "balderdash syndrome", or the "syndrome of approximate answers".

In politics it is simply known as 'Conservatism'.

The "update" to this post is that, having read it in the shadow of the revelation of Newt Gingrich's latest embarrassing scam, is does not require the slightest modification whatsoever.
at November 16, 2011

Email ThisBlogThis!Share to TwitterShare to FacebookShare to Pinterest
Labels: gingrich, Understanding The Right

Instead of Turtles, it's wingnuts all the way down.

Gingrich is not the biggest liar. He's told two significant truths, which puts him ahead of hundreds of republicans.

The absence of any meaningful discussion in this country is a direct result of the last 30 or so years of divisive aleinating type politics where sociopathic, Gordon Gekko type behavior is encouraged because otherwise would require a conscience and the ability to empathize with your fellow man regardless of race, gender, socio-economic background etc...
Anyone can tear down, it's those who build that can really make a difference.

At least the original Baron had a sense of humor. Newtie is just a sad old fat fuck.

1) And all too often they can get their more outrageous lies believed, because too many people in this country are as dumb as a box of rocks. Seriously, I strongly suspect that people in other countries tell "American jokes" involving ridiculous ways to change lightbulbs and such.

2) Even though it would be wrong to say that Democrats are as bad as Republicans because Democrats certainly don't strive towards blatant, ongoing sociopathy, all too often Democrats require little prompting to eventually play an enabling role.

DG: "‘Smaaaart’ is like unto wizardry: a scary, half-understood power"
Thank you so much for saying that. As a person of intelligence, I've been saying that for years. The undereducated masses really do seem to have no understanding of education or critical thought at all, and fear it as if it were sorcery or consorting with devils. Then, they inevitably try to "be smaaart" themselves, which involves making shit up on the spot and demanding everyone pretend it's true. I use the word "pretend" very carefully; I've been told "you have to let *me* be right now!", as if it's some sort of consensus.

He speaks the most important truth there is: "Yes, for money, I am more than willing to do what you ask."

When I started to read my post, I thought of the "half-understood wizardly" commend, and there it was, and there is my comment. That phrase still sticks with me and resonates with truth. People have become so hostile to education and intelligence that they have no idea what either is. Working in IT, I've argued with many (many many many) who firmly believe that a strongly held opinion is the exact same thing as knowledge or intelligence or being right.