"...My Name is Ozymandias 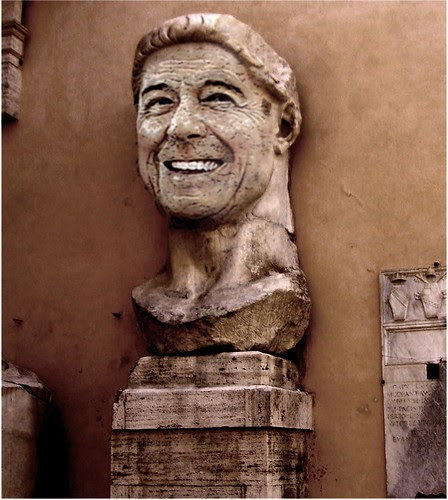 king of kings:
Look on my works, ye Mighty, and despair!"

Nothing beside remains. Round the decay
Of that colossal wreck, boundless and bare
The lone and level sands stretch far away.

However much the various factions and splinter groups on the Right may bite each other's ankles in rage and shock at each other's alleged heresies against the True Faith, the blunt truth is that they're all the same species of drunk drinking from the same bottle, all bombed out of their minds and hanging from the same rail in the same stinkhole bar: The House of Reagan.

From the bitterest Expats to the hardest-core Palinite Cultist, their internecine pissing matches are always over who the "real" inheritors of Ronald Reagan's legacy really is. And the truth is, they are all Reagan's ugly babies.

So when Sullivan calls out Andrew Brietbart's race-baiting as an --

"...old and disgusting canard devised by the Becks and Hannitys and Limbaughs in the tradition of Wallace and Atwater and McCarthy."

-- notice how carefully and gingerly he skips right one over the disgusting race-baiting of two of his Conservative Heroes (Ronald Reagan and Bush the Elder) who both waved the Confederate Flag and worked the racist dog-whistle with exactly the same, cold Brietbartian premeditation, and for exactly the same reason: because every Conservative knows deep in their heart that sucking Confederate and Fundamentalist dick is the only way they ever gain power, prestige, profit and victory.

And so they do it, knowing that people like Sullivan and David Brooks will forgive them.

And that specific, mutagenic strain of "Wingnut Doublethink" -- the training of an entire generation of Conservatives to mindlessly attack!attack!attack! the "Left" while holding themselves willfully and belligerently ignorant of what their Movement is really doing and who is really running it -- is, in the end, Ronald Reagan's most potent and vile political legacy: Strategic Forgettery.

Because however much one may agree with some of the Conservative Expat crowd over specific issues such as same sex marriage and marijuana legalization, as long as they cling to their own, obsessive Strategic Forgettery, they will always be fools and clowns and chumps. Because as long as they depend on their own Big Conservative Lie to tuck them in at night and tell them that they're good little Reaganites, they cede any pretense of occupying any moral high ground from which to render judgment on the Palinites and the Beckians.

The homunculi who are left inside the Big Tent Batshit Thunderdome are either stupid, evil or nuts...or some cocktail of all three. And if the trend lines of the last 30 years have proven anything, it's that Conservatives are such willing collaborators in their own brainwashing that neither the Expats or the Palnites and their Elite Enablers are capable of retaining any political inconvenient fact longer than 13 seconds (or, in the case of the Palinites, reacting to anything other than what Rupert and Rush tell them to be angry about this time.)

There is absolutely nothing left sifting around inside their mushy, angry skulls except that sparkly aluminum sand that good people at Ohio Arts use to make the Etch-a-Sketch.

Shake-shake-shake...and Ronald Reagan never sold weapons to terrorists, funded an illegal war, raised taxes four times, or left behind the largest deficit in American history up until that time.

Shake-shake-shake...and George W. Bush is the Greatest President Ever, you filthy, Liberal traitors!

Shake-shake-shake...and where did you ever get the idea that anyone in the Conservative Movement supported that "Progressive" George W. Bush?

Shake-shake-shake...Deficits are worse than six Hitlers!

Shake-shake-shake...why do you keep calling me a "Republican"? I'm a Conservative!

Shake-shake-shake...why do you keep calling me a "Conservative"? I'm an Independent!

Shake-shake-shake...why do you keep calling me a "Independent"? I'm a Independent/Conservo/Libertarian!

To win elections, crush the New Deal and sell the United States into perpetual corporate serfdom, it was Ronald Reagan and the rest of the Conservative Elites who spent years and years and literally billions of dollars to create the infinitely reprogrammable army of imbeciles from which many of those same Conservative Elites now flee in horror.

And however hard they try, will never let them forget it.

Email ThisBlogThis!Share to TwitterShare to FacebookShare to Pinterest
Labels: Sullivan, Understanding The Right

G'daang DG,
you never cease to amaze.
it's like watching a bullzeye throw itself onto the arrow - the truth begs for it.
keep on truckin bro..

There are none so blind as those who have scrotums blocking their vision.

But what of The Clenis? Lately, we don't hear too much of him. After he went and made tens of millions, its almost like he's part of their gang now, isn't it?!

With any luck, any luck at all, they'll all break out into assholes and shit themselves to death.

The whole freakin' thing is pure gold, but this:

The homunculi who are left inside the Big Tent Batshit Thunderdome are either stupid, evil or nuts...or some cocktail of all three.

I want to shove this post in every dumb-ass pied piper 'publican out there.

Krugman has been reading driftglass

There’s also the unwillingness of self-styled centrists to face up to the realities of the modern Republican Party; they want to pretend, in the teeth of overwhelming evidence, that there are still people in the G.O.P. making sense.

Maybe you can get DF Brooks' spot someday.

Another blogger so deranged by the ineffectualness of his own beliefs that he sports tiresome profanity as an attempt at persuasiveness. Are you mad because your mom overslept and you had to take the bus this morning?

...another troll with a thesaurus. Are you mad because your dad was too hungover to take you to the bagger parade this morning?

Sheer fucking genius. As usual. I grovel. As usual. Drifty, you're my (sans-feet-of-clay)idol.

Wow. Your very own troll. About fucking time.

The most devastating weapon to the hypocrite--the mirror.

I wish you would write a screenplay about the legacy of Reagan, he has been whitewashed better than anyone since Jefferson.

they are aaaaaalllll batshit crazy