NEW ORLEANS — In the most serious setback yet in the effort to stem the flow of oil gushing from a well a mile beneath the Gulf of Mexico, BP engineers said Saturday that the “top kill” technique had failed and, after consultation with government officials, they had decided to move on to another strategy.

Doug Suttles, BP’s chief operating officer for exploration and production, said at a news conference that the engineers would try once again to solve the problem with a containment valve and that it could take four to seven days for the device to be in place.

“After three full days of attempting top kill, we now believe it is time to move on to the next of our options,” Mr. Suttles said.
...

In other news, David Fucking Brooks wrote another column Friday. 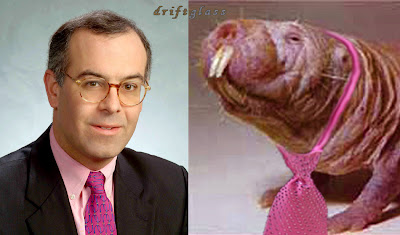 And it can be boiled down to two words: Shit Happens.

As the criminal incompetence of oil moguls slowly strangle the Gulf of Mexico, Bobo offers up his best, puerile, Ruling Class Shrug and drops a spicy, 800-word log explaining that complex systems are...complex.

So, y'know, chill, because accidents happen.

Funny, isn't it, that when it's poor people or brown people who fuck up or break the law or just crap out -- either in reality, or in the wingnut's bigoted little imaginations -- Conservative targeting software auto-fucking-matically locks in on it as proof of a failure of citizenship or character? Some taint of blood and class.

Hell, if he hadn't made political grappling hooks and pitons out of demonizing the character of various imaginary hippies, Negroes and assorted other shiftlessness figments of the Right's toxic fantasies, Bobo's beloved St. Ronnie would never have shucked his way into the White House.

But when it's Bankers or Oil Moguls or other members of the ruling class that Bobo so slavishly serves who gamble, lose, and blow a hole in the economy or the planet big enough to end civilization, we get reams of batter-fried bullshit like this:

"If there is one thing we’ve learned, it is that humans are not great at measuring and responding to risk when placed in situations too complicated to understand. "

Of course the world is complicated; in fact it is so patently and undeniably obvious that the world is complex and getting more so every day that pissing away an entire column in the Time's reiterating that fact in mopey, condescending language seemed almost too Friedmanesque for Bobo.

But of course, as anyone who has ever worked more than five minutes in a large bureaucracy knows, it is equally true that a nest of bad, lazy, incompetent executives at the tops of powerful organizations can create cultures of reckless risk and unaccountable failure; that Confederacy of Dunces who drive out the smart and prudent and raise up the ass-lickers who promise to deliver the impossible at bargain prices.

And having purged their ranks of anyone who will tell them the fucking truth, they're the ones play Mumblety Peg with our collective futures. Who surround themselves with a retinue of sycophants who are paid handsomely to tell them what they want to hear: that with enough lawyers and technology they can stay safely insulated from any and every potential downside.

And when it all goes "Boom"?

They're the ones who find some poor schnook who in the mail room who's not in the club to take the fall.

And they're the ones who, week after week, read David Fucking Brooks' column in the Times (or watch him dine out on his own establishmentarian upchuck by regurgitating the same column a couple of times on teevee) for the same reason W.C. Fields read the bible:

Yeah, accidents happen. But grown-ups prepare for them, you useless fuck Brooks.

The bubble protects him very well indeed. However, outside the bubble, those who read his crap say, "Huh?!1? Where's the focus? What is this an apple and orange word salad?" Or so I've been told anyways. Besides, I'm not one who creates theorems for or against any type of fabrication that David Fucking Brooks may or may not advance. (Heh. Nah nah to David. I know how to use a thesaurus also too.)

What I just despise are the out right lies he promotes, such as, "...unanticipated systemic crash". It was anticipated by many engineers who saw design flaws, wrote B & W, and top government people in TVA to no avail, they were all ignored, brushed aside, or fired for trying to warn the powers that be that there was a problem... a huge problem and the same behavior continues. It continued at Browns Ferry nuclear plant, engineers saws the problem, sounded the alarm and were told to "shut the fuck up", construction was just too far along to implement their changes. It is not that these so called accidents aren't anticipated, it is that the cost benefit analysis used by these people in charge does not include in their calculation any value for the planet that we live on and whose continued viability we depend on for life itself. Really.WTF

The "technology is too complicated" is just idiotic. Does Brooks use that excuse for plane crashes, too?

harmfulguy,
...but only hit and run.

Roket,
I wish it were so, but according to China-expert James Fallows, the NYT is the media "face" of the United States as far as the people/government of China are concerned. Which means that clowns like Friedman and Brooks speak for "us" to an audience of a billion whether we like it or not.

knowdoubt,
When a company falls on its ass, it usually turns out that there were people in-house who had been warning management all along. They are almost always among the first to be fired.

KWillow,
To run away from his years of complicity in Conservatism's crimes and failures, sometimes I think Brooks is having a kind of quiet, public mental breakdown. Fatalism and predestiny have become his only alibis.