The Invasion of Wall Street 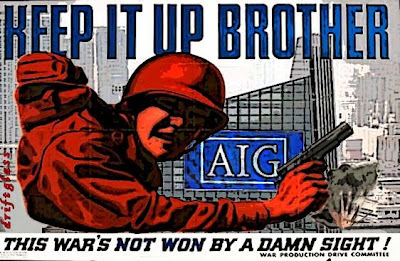 This being the case, I believe according to the Bush Doctrine only one course of action remains open to us.

For ten years, the regime in Wall Street has been using evasion and deception to stockpile some of the mankind’s deadliest financial instruments to use against the taxpayers of the United States and our economic allies around the world. Regime scientists and secret business units have worked around the clock to produce warehouses of toxic mortgages. Secret caches of Collateralized Debt Obligations. Credit default swaps so lethal one teaspoon-full can kill an entire lending institution.

During all of that time, our attempts at diplomacy have been used as a ploy to gain time and advantage.

My fellow citizens, events on Wall Street have now reached the final days of decision.

Intelligence gathered by this and other governments leaves no doubt that the Wall Street regime continues to possess and conceal some of the most lethal financial instruments ever devised. The regime has a history of reckless, destructive behavior in the region. It has a deep hatred of America and our friends and its B-schools and internship programs have aided, trained and harbored some of the most notorious economic terrorists in the world.

The danger is clear.

The United States and other nations did nothing to deserve or invite this threat, but we will do everything to defeat it. Instead of drifting along toward tragedy, we will set a course toward safety.

Before the day of horror can come, before it is too late to act, this danger will be removed.

Following the events of the last few weeks, no one can possibly claim that the financial system has reformed. And it will not reform so long as the Wall Street regime holds power.

Well, all the decades of destruction and cruelty have now reached an end. Wall Street powerbrokers, their vice presidents and directors must resign and leave the within 48 hours. Their refusal to do so will result in military conflict commenced at a time of our choosing.

For their own safety, all foreign nationals, including journalists, tourists, and Russian mobsters should leave Wall Street immediately.

Many New Yorkers can hear me tonight in a translated radio broadcast, and I have a message for them: If we must begin a military campaign, it will be directed against the lawless men who rule your financial district and not against you.

As our coalition takes away their power, we will deliver the food and medicine you need. We will tear down the apparatus of terror and we will help you to build a new Wall Street that is prosperous and free.

In free Wall Street there will be no more wars of economic aggression against your neighbors, no more greasy little turds who made a billion fucking old ladies out of their pensions getting all the best seats at Sushi Yasuda. No more wildly overpaid momsers driving the price of top-shelf hookers into the stratosphere. No more shitty Hollywood vanity project movies bankrolled by Goldman Sachs douchebags.

The tyrants will soon be gone. The day of your liberation is near.

I urge every member of the hourly-wage-class: If war comes, do not fight for a dying regime that is not worth your own life.

Should the Wall Street regime choose confrontation, the American people can know that every measure has been taken to avoid war and every measure will be taken to win it.

Americans understand the costs of conflict because we have paid them in the past. War has no certainty except the certainty of sacrifice.

Yet the only way to reduce the harm and duration of war is to apply the full force and might of our military, and we are prepared to do so.

If the Wall Street regime attempts to cling to power, they will remain a deadly foe until the end.

In desperation, they and their elite “Retention Bonus Guard” might try to fuck over the American people even further, and this very fact underscores the reason we cannot live under the threat of blackmail. The economic threat to America and the world will be diminished the moment that the Wall Street regime is smashed.

In this century, when evil men plot economic terror, a policy of appeasement could bring destruction of a kind never before seen on this earth. Such people do not reveal these threats with fair notice in formal declarations, and as such the security of the world requires decisively defeating Wall Street now.

As we enforce the just demands of the world, we will also honor the deepest commitments of our country. Unlike the Wall Street regime, we believe New Yorkers are deserving and capable of human liberty, and when the tyrants have departed, they can set an example to all the financial capitals of the world of a vital and peaceful and self-governing nation.

Free nations have a duty to defend our people by uniting against depraved oligarchs who clearly don’t give a shit about anyone or anything but their personal wealth and power and who have done such damage to our world economic system already, and, tonight, as we have done before, America and our allies accept that responsibility.

Good night, and may God continue to bless America.

*(This post made with 85% recycled material taken directly from the Dear Leader’s 2003 Reichstag Address pre-Iraqi invasion speech.)
at March 22, 2009

I thought that shit sounded familiar.

About half way through, alarm bells started going off.

At this point though, I would wildly cheer on an armed invasion of Wall Street , we should get a deck of cards with the names and pictures of the most wanted fuckers just like BushCo did for the Bad Boys of Baghdad.
Collect 'em all.

What the fuck do we have to lose?

Facing clear evidence of peril, we cannot wait for the final proof, the smoking gun that could come in the form of a mushrooming economic failure.

It is time. It is past time.

Bust out the torches and pitchforks, the tar and the feathers. It has reached the point where going full-on medieval on the motherfuckers is the only rational course of action.

We The People are a little fucking tired of l'etat c'est moi.

At first blush I was aroused by an overwhelming blast of FUCK YES! Then as the harsh klieg light of grim experience washed over the plan and its planners, Fuck Yes instantly became Oh Hell NO!

The fungi who brought us the perpetual war on competence?
The fire brigade from hell?
"Everything's wet and broken. Our work is done"?

Got a Plan B? Maybe something with a nuclear option?

Oh, BTW, drifty, I don't know if you've noticed, but your comments are totally hosed on the individual post page. The pop up window is cool, but the permalink has all the comments on top of each other, both in FF and IE.

Just thought I'd mention it.

comments are totally hosed on the individual post page. The pop up window is cool, but the permalink has all the comments on top of each other, both in FF and IE.
-----
I have the same problem in Firefox in my far northern domain (because location affects the intertubes' reception on my computer's rabbit ears).

If I try to read the comments outside of the blogger.com window, the words look like alphabetical Cuisinart.

It certainly IS war they've declared on us! Honestly, how do we fight back outside of government? And just why doesn't the government just take over the Federal Reserve Bank and boot those fuckers OUT on their ears. Begin at the beginning. The s&l crisis saw take overs so why in hell are they not doing it now... beginning with the Fed.

Yes, financial regime change is the ONLY way. I totally believe this did not just "happen" but has been in the coverup stages for two years now. Fund it by taking ALL of those peoples' money they stole from everyday Americans. Seize all of their accounts no matter where they are just like they do drug money or terrorist money.

Frog marching..... let's get on with it dammit. Mccain and Phil Gram first.

You're not too bad yourself, Drifty.

Finally, a context in which that speech makes perfect logical sense and its proposed remedy is completely reasonable. Too weird.

Freakin' genius, as the kids would say.

I wrote a post yesterday that tried not to say exactly this:

Bust out the torches and pitchforks, the tar and the feathers. It has reached the point where going full-on medieval on the motherfuckers is the only rational course of action.

Dg, I love your measured rationality amidst the thunderclaps of the continuing onslaught. You are the first place I turn to when the fog gets too thick to breathe.

Thanks for being my lighthouse in these increasingly dark ages.

As for the hosed comments - if you click on the Post-a-Comment link you can read them all - software snafu or Reichstab?

I say we take off and nuke the site from orbit. It's the only way to be sure.

Bwahahahaha! And a hoot and a holler... This will be a classic one day.