I For One Am Sick And Tired 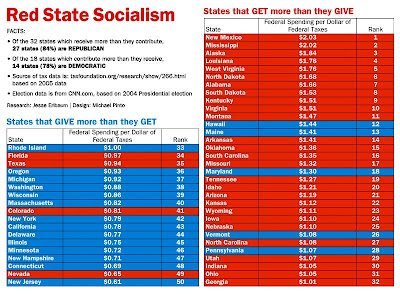 Of doling out my hard-earned tax dollars to the lazy, sticky-fingered losers of the People's Republic of Jefferson Davis.

(From this site, with a hearty h/t to Jen)

Jefferson Davis was also a terrorist/unlawful combatant. He tried to blow up lots more stuff in Washington than that tyro, William Ayers.

Thanks for the graph...I remember reading something similar a few years ago in The Great Divide, and it's nice to see it updated.

You are the 21st Century Bard.

That's a hell of a graphic.

Cronyism is the socialism in the red states. To them its not socialism because its not EQUAL redistribution of wealth. How much of that government money actually reaches the people its intended to help?

Hopefully in the next 8 years they'll be reminded they _lost_ the civil war and need to get with the program.

I for one would be glad to see a do-over....let's give them another chance to secede. Bon voyage, mofos!

I had to search the bowels of an almost-dead hard drive to refind this gem -- Blue State Rant -- which was submitted ANON to a contest on start-up of the Huffington Post Blog 3 years ago.

As per 'shane' above --
...let's give them another chance to secede. Bon voyage, mofos!

Fuck the South. Fuck 'em. We should have let them go when they wanted to leave.

But no, we had to kill half a million people so they'd stay part of our special Union. Fighting for the right to keep slaves -- yeah, those are states we want to keep.

And now what do we get? We're the fucking Arrogant Northeast Liberal Elite? How about this for arrogant: the South is the Real America? The Authentic America. Really?

Cause we fucking founded this country, assholes.

Those Founding Fathers you keep going on and on about? All that bullshit about what you think they meant by the Second Amendment giving you the right to keep your assault weapons in the glove compartment because you didn't bother to read the first half of the fucking sentence?

Who do you think those wig-wearing lacy-shirt sporting revolutionaries were? They were fucking blue-staters, dickhead.

Think there might be a reason all the fucking monuments are up here in our backyard?

No, No. Get the fuck out. We're not letting you visit the Liberty Bell and fucking Plymouth Rock anymore until you get over your real American selves and start respecting those other nine amendments.

Who do you think those fucking stripes on the flag are for? Nine are for fucking blue states. And it would be 10 if those Vermonters gad gotten their fucking Subarus together and broken off from New York a little earlier.

Get it? We started this shit, so don't get all uppity about how real you are, you Johnny-come-lately "Oooooh I've been a state for almost a hundred years" dickheads. Fuck off.

Arrogant? You wanna talk about us Northeasterners being fucking arrogant? What's more American than arrogance? Hmmm? Maybe horsies? I don't think so.

Arrogance is the fucking cornerstone of what it means to be American.

And I wouldn't be so fucking arrogant if I wasn't paying for your fucking bridges, bitch.

All those Federal taxes you love to hate? It all comes from us and goes to you, so shut up and enjoy your fucking Tennessee Valley Authority electricity and your fancy highways that we paid for. And the next time Florida gets hit by a hurricane you can come crying to us if you want to, but you're the ones who built on a fucking swamp.

"Let the Spanish keep it, it’s a shithole," we said, but you had to have your fucking orange juice.

The next dickwad who says, "It’s your money, not the government's money" is gonna get their ass kicked.

Nine of the ten states that get the most federal fucking dollars and pay the least ... can you guess? Go on, guess. That’s right, motherfucker, they're red states.

And eight of the ten states that receive the least and pay the most? It’s too easy, asshole, they’re blue states.

It’s not your money, assholes, it’s fucking our money. What was that Real American Value you were spouting a minute ago? Self reliance? Try this for self reliance: Buy your own fucking stop signs, assholes.

Let’s talk about those values for a fucking minute. You and your Southern values can bite my ass because the blue states got the values over you fucking Real Americans every day of the goddamn week.

Which state do you think has the lowest divorce rate, you marriage-hyping dickwads?

Well? Can you guess?

It’s fucking Massachusetts, the fucking center of the gay marriage universe. Yes, that’s right, the state you love to tie around the neck of anyone to the left of Strom Thurmond has the lowest divorce rate in the fucking nation.

Think that’s just some aberration? How about this: 9 of the 10 lowest divorce rates are fucking blue states, asshole, and most are in the Northeast, where our values suck so bad.

And where are the highest divorce rates? Care to fucking guess? 10 of the top 10 are fucking red-ass we're-so-fucking-moral states.

And while Nevada is the worst, the Bible Belt is doing its fucking part.

But two guys making out is going to fucking ruin marriage for you? Yeah? Seems like you're ruining it pretty well on your own, you little bastards.

Oh, but that's ok because you go to church, right? I mean you do, right? Cause we fucking get to hear about it every goddamn year at election time.

Yes, we're fascinated by how you get up every Sunday morning and sing, and then you're fucking towers of moral superiority. Yeah, that's a workable formula.

Maybe us fucking Northerners don't talk about religion as much as you because we're not so busy sinning, hmmm? Ever think of that, you self-righteous assholes? No, you're too busy erecting giant stone tablets of the Ten Commandments in buildings paid for by the fucking Northeast Liberal Elite.

And who has the highest murder rates in the nation? It ain't us up here in the North, assholes.

Well this gravy train is fucking over. Take your liberal-bashing, federal-tax-leaching, confederate-flag-waving, holier-than-thou, hypocritical bullshit and shove it up your ass.

And no, you can't have your fucking convention in New York next time. Fuck off.

What does this mean, kevron?

KEvron said...
"I had to search the bowels of an almost-dead hard drive to refind this" use a mnemonic.
KEvron
12:31 PM

Does this mean you are the author of this delicious Blue State Rant?? Or, you know who did??

Actually I don't give a rat's rectum. I found it a HuffPost as noted and have loved it mightily for 3 years. Thanks for the heads up.

Oh, not to be too stupid here. I know what a 'mnemonic' is and I can't figure out what you meant. Enlighten moi, pls.

just being playful. in wryly suggesting a simple "mnemonic" (i thought it was funny to suggest the blog's own title as the mnemonic - "fuckthesouth.com" sorta says it all), i also provided a simple link.

and no, i'm not the author. i have family in the south.

lemme put a finer point on it:

the other thing i was oh-so-slyly suggesting, and probably more to the point, was that a link is preferable to the whole of the text.

Drifty, thanks so much for running! May I note that the guy who created this--Mike Pinto of Very Memorable Design (vm.com) isn't even a hardcore politico. I think that the PERFECT poster would be the "f the south" post from above captioning this graphic.