Didn’t we shred the Constitution 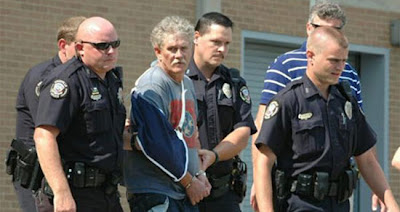 so The Decider could keep us safe from him?

KNOXVILLE, Tenn. - An out-of-work truck driver accused of opening fire at a Unitarian church, killing two people, left behind a note suggesting that he targeted the congregation out of hatred for its liberal policies, including its acceptance of gays, authorities said Monday.


A four-page letter found in Jim D. Adkisson's small SUV indicated he intentionally targeted the Tennessee Valley Unitarian Universalist Church because, the police chief said, "he hated the liberal movement" and was upset with "liberals in general as well as gays."

Adkisson, a 58-year-old truck driver on the verge of losing his food stamps, had 76 rounds with him when he entered the church and pulled a shotgun from a guitar case during a children's performance of the musical "Annie."

The Knoxville News Sentinel reported Monday that Adkisson may also have chosen the church because his ex-wife was a former longtime member of the congregation.

He remained jailed Monday on $1 million bond after being charged with one-count of murder. More charges are expected. Four victims were hospitalized in critical condition.

The attack Sunday morning lasted only minutes. But the anger behind it may have been building for months, if not years.

"It appears that what brought him to this horrible event was his lack of being able to obtain a job, his frustration over that, and his stated hatred for the liberal movement," Police Chief Sterling Owen said.

Adkisson was a loner who hates "blacks, gays and anyone different from him," longtime acquaintance Carol Smallwood of Alice, Texas, told the newspaper.

Yes, the world is full of violent madmen.

voices in his head. 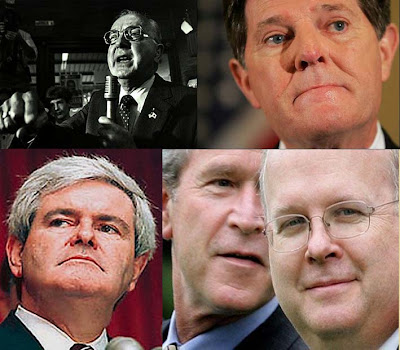 that holds power by telling him that his paranoid delusions are perfectly reasonable.

Nor every psychotic has his homicidal, eliminationist, victimhood fantasies

At one end of that pipeline you have hatepimps in $1,000 suits like Micheal Savage, Rush Limbaugh, Jerry Falwell and Karl Rove who built their careers telling pig people that Liberals, gays, uppity women and assorted brown people are to blame for their miserable lives.

The other end of that pipeline empties into the toxic "Always wrong but never in doubt" sewer of Modern Conservatism out of which yet another "Running low on food stamps, but with plenty of ammunition" wingnut oozed, girded with that distinctly ignorant brand of vengeful righteousness the Conservative movement doles out by the job-lot, armed with all the firepower he could carry, looking for some Liberals to kill.

However, as tragic as their rampages always are, at the end of the day the handful of domestic terrorists who routinely boil out of the noxious heart of the Conservative Movement don't scare me half as much as the millions of just-as-deluded-but-not-quite-killcrazy, dog-loyal, Fox-addled, Hate Radio junkie Americans who fervently believe exactly what the likes of Adkisson and McVeigh and Rudolph believe. Who go to the polls every two years all burning with the same wingtard certainty that if only they could force-march humanity backwards into a New Dark Age, the Liberal monsters under their bed would finally be banished forever.
at July 28, 2008

Peace and love don't put butts in their pews. Vengence and smiting fill them with asses. Shit in a suit preaching prosperity for their chosen people. Stealing hopes and replacing what they take with a dementia of finger pointy righteousness and smug superiority.

And it's the Savage/Hannity/Cigar-As-Penis hatemongers that support cutting off food stamps for him to begin with. What a fucking idiot. And people died for that lunacy. Again.

The very folks who should be on the receiving end of someone's 2nd Amendment rights.

Dude, you said this much better than I ever could, althought I tried:

I am SO stealing that.

TWO driftglass gems in one post! It's going to be a good day.

Digby has an excellent post up about what she calls the "Religion Industrial Complex".

funny how the faux news article mentioned not one word of those books being found in his apartment. You'd think they'd be so fucking proud that their message is being heard. fuckers.

The whole lot of them, fuckers.

With a tanking economy, falling house values, the possibility of an Obama presidency, etc., etc., expect more of this.

With such a huge investment in hate, who's surprised.

Sadly and scarily expect a lot more of this.

Drifty, I do think I love you. Well, your mind anyway.

Know what will prevent this from happening again? More guns!

Add me to the list of those who say, "Expect to see more of this".

And also expect what passes for the Democratic "leadership" to sit on their comfortable, fat behinds and not trouble themselves in doing a goddamn thing to combat it. Musn't rock the boat, don'cha know. After all, it might upset their corporate masters to see them develop any spines. And those of us who differ can be contemptuously dismissed (as Harry Reid call us) as "extremists".

>the millions of just-as-deluded-but-not-quite-killcrazy, dog-loyal, Fox-addled, Hate Radio junkie Americans who fervently believe exactly what the likes of Adkisson and McVeigh and Rudolph believe

Match. All too depressingly true.

Right up there with people that bomb womens health clinics, shoot medical professionals for what about 100 years earlier would have been blood transfusions or surgery, or fly airplanes into buildings. They are all terrorist, one of them alQaeda, none of them from Iraq.

"With such a huge investment in hate, who's surprised?"

Yes, the world is full of violent madmen.

But not every madman comes with a billion-dollar army of media backup singers that all sound exactly like the voices in his head.

Now we know why Castle Driftglass is not visible from the other side of the Wilson Avenue water crib.

BG is right -- you are a blogging deity. We are in awe at your offerings to us mere mortals.

Good shit Drifty, and spot on.

More shootings to come.
We know it, huh.

All y'all be safe, and duck and cover.

people just might too busy rioting over gasoline, clean water, or food to take advantage of the open season on us. but what do i know.

i have been thinking real long and hard about whether i should own some sort of, you know, scary stuff. boom stick. and all that.

Let's not forget right-wing terrorist William Krar, found in 2003 to have built a functioning chemical bomb that would have been able to kill over 6’000 people with hydrogen cyanide gas. Never heard of him? Think you would have heard of him if he was a Muslim or left-wing extremist? I think so, too.

Even though this tragedy was on a much smaller scale, I really have to wonder the same thing I wondered with 9/11. How can these deranged fruitcakes think that any sort of just Divinity would approve of their violently projecting their ego-problems onto the world around them? I know that there are fanatics and extremists who nuture their delusions and hurt feelings of these violent actors, but you would think common sense would intervene at some point. Just another case of the realities of human nature showing me how naive I am, I guess. :-(

Thank you for the many, thoughtful responses

This was moving and important to hear. I am glad many are at forgiveness and working through things on that issue, but I am still just too incredibly pissed off and sad. I'm going to link to this post. Here is where I am at and thanks:

Thanks for saying it so well.