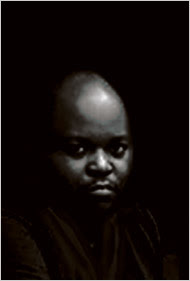 Gilly got a much-deserved write up in the NYT today.

The GNB has all the links and such here, as well as a lovely wreath of words from Jesse Wendel and some well-delivered corrections to the general tone of the piece (For example, somebody tell Matt Bai that he voided his poetic license when he decided to trowel on the "po' lonely guy" bathos when in real life those that knew him say Steve was not that way at all.)

Still, I can easily believe that someone like Gilly was a man alone in an entirely different sense: a man who could see things with a clarity that others did not see at all; who was every day terribly troubled by events (and their likely consequences) that others were not even aware existed.

And that particular Cassandric watch tower can be a very lonesome dwelling.

So to put it better than I ever could, I'm going to shamelessly steal respectfully borrow some words from another writer I admire greatly. One who was also simultaneously hugely talented and under appreciated. Who harrowed a living out of the air with just his pen, who possessed that singular gift for reaching into his writer's bindle and plucking out exactly the right word, and who died far too young and unrewarded.

It's a poem which reads dark and rather melancholy, and is therefor a pretty accurate reflection of my own, inner emotional state -- one of selfish anger that I will never read another new post from Gilly again.

But then from somewhere I hear Steve admonishing me -- "Yeah, whatever. Now fuck your self-pitying bullshit and get back to work." -- and I know that this

is so much more the right coda to the Big Guy's life and work.

What'd you do, pull an all nighter?
I just did and I am going to sleep.
I'll peruse all this later when both synapses are firing.

Yeah, I especially think the latter eulogy fit Steve's personality more. I think it equally important to note that the good die young, which means us smelly old bastards get even lamer obits from people who also never knew us and couldn't, because we'd piss on them given the opportunity.

I also found it entirely unchivalrous of the Mets to drop out of the World Series chase on the final day of the season. Steve deserved better than that, the dirty rotters.

It's in Sunday's Magazine Section so it's not on my newsstand yet. But well worth the five bucks tomorrow morning to have the tree-killing edition for my file. And thanks for the head's up dg I'll make a link in an open thread this afternoon or tonight xo

Still miss SG. Every day. His was the first blog I read almost since I've been reading blogs. It's how I discovered YOU.

I even felt comfortable enough to comment over there on a semi-regular basis, because even when you disagreed with him he fought fair if you did. I was never one of the real regulars, but he still always treated my arguments with respect. Thank goddess, because if he had ever turned the wrath he rained down on the wingers onto me, my blog commenting would have ended there!

But I think he reserved that sort of contempt for the wingers because they don't fight fair, don't do anything but make ridiculous assertions which they supply no evidence to support.

It would be nice if SOMEONE, anyone, in the corporate media would point that shit out occasionally.

The world is a poorer place without Steve Gilliard.

I can't believe how much I miss someone I never met in person and wish I had kept his emails. I cried when I read the article with Jesse's corrections, what a loss to the world.

Always loved the way Wolcott would rub Mr. Gilliard's cursing in the noses of the bridge club.

And I think it needs to be said, right here and right now, that one of the best things he ever did (amongst many, many, many other even bester things) was to kick Driftglass out of the nest and tell him to get to work.

Because writing is hard work.

steve was the tops. he never got into the stupid ass flame wars and damn fisking of each other that most blogs seme to think is the reason to blog.

he was (and by comparison, still is) the classiest blogger around.

He was a great writer...I read the NYT piece, and mostly I hate to say it- they just don't understand what Steve was- he was a real Voice and Journalist , it is stunning to me that they embrace someone like cough Judy Miller ( I hate even mentioning her)....Steve was the REAL Deal....he had intergrity and he wrote what was REAL....

I did not even know that he had died....so I was really crushed....stunned...I used to read him at Kos...and to think he had such health problems....this is why I have wanted a Blogger Coalition to form so we could buy Group Insurance.

Thank you to everyone for honoring him and remembering him.....namaste.

Fuck you Drifty for making me cry... and thank you for the same.

I was not a regular, but peering in at TNB was, for me, a bit like stumbling into an advanced particle physics lab, with only an etchasketch and a box of broken crayons in my hands. I never commented, but loved to read the discussions. The one facet of Steve that blew me away was how young he was.

I think the NYT article does him an injustice by describing his zeal for partisan debate as 'vicious' at times. Uncompromising and Ferocious, yes, and he could lambaste, but vicious? I dunno, that just has a sinister ring to it which completely misses how brilliantly engaged he and the commenters were. Where else was a debate actually being carried out with such reverence for history? Say what you will about TNB, but if one actually read any of it, IMHO that person either learned something they hadn't previously known, indelibly, or crawled back under their fuckin rock licking deep and unsettling wounds.

The brightest of candles often burn fast, one should be so lucky to have caught a glimmer of his illuminative skills.

"Death makes angels of us all and gives us wings where we had shoulders smooth as ravens' claws."--James Douglas Morrison

I never got around to earnestly delving into Steve Gilliard's work until it was just about too late. But I read enough of it to realize that he wrote with true passion, not the bile or manufactured outrage too many of us have succumbed to over the last year or so. This post is pitch-perfect, man. Thank you...

Steve was, early on, one of the very few early dairy writers at dKos that stood out by a mile. He knew his history, he knew a lot more about military doctrine than anyone not in the armed services (and kept the salient points in mind a lot better than a few who have been or are there), and he could argue.

And I don't mean being cruel or aloof or rude. He could put forward his points, defend them well, and leave just enough of an opening that, if you wanted to switch from arguing to questioning, fine. But if you wanted to press your point, you had to be prepared and convincing.

And unlike too many folks that change from not suffering fools gladly to not suffering anyone in any way "unpleasant", Steve was, as he rose in stature in this community, still accessible, still feisty, but still willing to explain, to teach, to argue - not just to kick a butt or two because he could, but to make sure we knew the score as he saw it and why, in detail.

And I can't think of anyone I respected more in this electronic wonderland, for that simple reason.

Rest in Peace, Steve. Pray for us left behind who have a hell of a mess left to clean up.

Damn son, that's exactly how he might have said it, too. Who says he's not still around in any way, shape or form? Not I, my friend.

We never die, we only transform. Steve Gilliard is watching over everything now.

The more I read the Bai piece, the more eet strikes me that Bai ees "the lonely one", and has simply projected that feeling onto Sr. Gilliard.

Not Bai's worst work, but almost as lazy as the laziest of Bai's work.

Here's a second to Skunqesh's take on the stupid vicious bit. Except I think the objection is really too mild.

If you ever want to see NYT people clutching their pearls so tight they choke themselves, why not take them over to GNB some day when Lower Manhattanite is in top form? He's another of Gilliard's excellent achievements, and (while of course he's not vicious) I don't know what word Bai could find for that gent's particular style.