In A Gitmo Duh Veto, Baby. 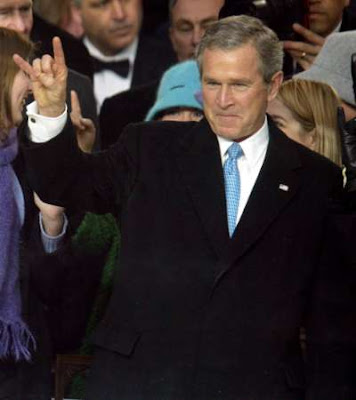 I Am The Lizard King!

Terrified-of-being-water-tasered Spellbound crowd listens to Dubya make Pet Sounds for over an hour.

Bush: 'I Make a Lot of Decisions'

LANCASTER, Pa. — Give the man a microphone and he'll talk about anything. For 76 minutes, President Bush prowled the stage Wednesday in the heart of Pennsylvania Dutch country, giving a speech and answering questions about everything from his opposition to tax increases to his veto of a bill to expand children's health insurance.

But he covered a lot of other ground, too.

Bush gave an intriguing description about what happens when businesses expand, as was the case here at a company run by a woman.

"And when the building expanded, it prevented (sic) additional opportunities for people to work. Tax cuts matter. I'm going to spend some time talking about it," the president said.

He offered a pointed description of his job.

"My job is a decision-making job. And as a result, I make a lot of decisions," the president said.

He elaborated on that point later.

"I got a lot of Ph.D.-types and smart people around me who come into the Oval Office and say, `Mr. President, here's what's on my mind.' And I listen carefully to their advice. But having gathered the device (sic), I decide, you know, I say, `This is what we're going to do.' And it's `Yes, sir, Mr. President.' And then we get after it, implement policy."

Bush, known for his impatience when fellow leaders rattle on, acknowledged he was doing the same himself in his opening remarks.

"I'll be glad to answer some questions from you if you got any," he said. "If not, I can keep on blowing hot air until the time runs out."

Word has it that his ominous encore featured both “Stairway to Tehran” and “Iranian Rhapsody”.

Ahmad-in-ejad has a devil put aside for me

A simple ass-kicking in any broken glass strewn back-alley would suffice.

I have to respond to this at my place.

He doesn't delegate so much as inebriate.

this is the leader of the free world, the C student who defers to the shoe queen

we have no hope

GNB covered this recently, but it bears repeating

No way is Lil Dubbie gonna kick back and make $50-100K speeches afterwards.

I can see some conservative thinktank aka ReButtlickin Welfare organization shelling out the first time or two, just to 'prime' teh Fountain Head of neocon KewlAid. And of course he'll get paid for access to Jeb and his daddy's fortune. But he'll just be a token, a Shemp of the Boosh family, a has been who never could talk, much less think - F'n R.Raygunz with Alzheimers made more goddamn sense than this "mentally underclocking" asshat.

On the other hand, if he does make the regular talk circuit, it's just job security for the Standup Comic industry.