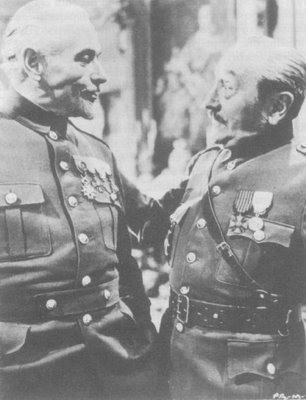 It doesn’t especially shock me that you find men with good hair and fascist hearts conspiring with others of their breed to grab power. What nauseates me is that so many millions of my fellow citizens think that having them rule – knowing that they despise the Constitution and the rule of law – is an excellent idea.

That so many millions of Americans are driven by such perverse racist and theocratic-based ideologies. That they have such open contempt for their own country, or are so sunk into their own delusions that they vote ever sharper axes into the bloody hands of their own executioners.

Where did “humility” go? “Public Service”? The Commonweal.

Occasionally you hear the White House using some term along that spectrum. Coming out of the Administration of boundless deficits, limitless tax cuts for millionaires, a lie-drive war, torture, murder, hundreds of “Fuck-You” signing statements and domestic spying…such words are the worst kind of obscenity.

Because the alibis of the Lays and the Bushs of this world have blended, intertwined and resolved into a single, wormy drone.

My minions failed me!

Blah, blah, blah the Board.


The CIA (see caveats in Part 1) are, in the end, cartographers. And CEOs are spinners of yarns about fabled, distant lands.

In the best of circumstance, the “visioneers” consult the best expert mapmaker they can find and lay out a plan for creating a future based on the most reliable data about the present they can get a hold of.

But these are not the best of circumstance. Not even close. With the ascension of George Bush to the White House, we have witnessed the apotheosis of a diseased world view that has been left untreated for years.

One where the fabulists declare the absolute existence of one El Dorado after another, all just over the rim of the world, all reachable if only we blindly obey whoever wears the crown this week.

Only then are the map makers brought it, and the ritual profession executions begin. Any one of them that gets within a country mile of the truth – whose answer is “No” or “I don’t know” or “What you are proposing is, by its nature unknowable. But based on available evidence, you’re fulla shit.” – is sacked outright or radically marginalized.

If they speak out, they know there are Swiftboats gassed up and ready to ruin them.

This is the “Gut and Slut”.

This is the Pogrom against Competence that has gone on in virtually every Agency by the Bushies and has lead directly to the signal disasters of 9/11, Katrina, Iraq and all the rest because the Dubya and the rest of the GOP slavishly follow the Evil CEO model in every single thing they do.

And once the Administration – be they Bush/Cheney or Lay/Skilling -- has weeded out all of those who have committed the heresy of telling the truth, in come the Brownies and the Chertoffs and the Rummys. The hacks whose sole job is to carry out the Dear Leader’s overall mandate, whether it is to loot a company or liquidate and privatize the entire government, and to protect the Leader from criticism, oversight and responsibility . Especially when hurricanes or IEDs or nosy auditors and reporters blow yawning holes in the onion-skin thin shield behind which these evil men work diligently on their real projects.

Reality, in the end, is the eternal enemy of GOP and the Huckster-in-Chief, and the radicals, bigots and Dominionists who still support him. And because reality is pole star of those who believe in a “measure twice/cut once” approach to the world, it is unavoidable that a delusion-drive CEO like George Bush would find himself on a collision course with a data-driven organization, as elements of the CIA still are.

What is disastrous, of course, is that Reality -- “The Anthill (see Part 1)” -- cannot be breached and conquered, and we can only come to grief over and over and over again as long as we are in the hands of liars and lunatics who insist that it can be.

The good news, bittersweet though it is, is that… “The Anthill” cannot be breached and conquered, and those who insist that it can are fated to fail.

The tangible consequence of that failure is what we see every day in Iraq, in New Orleans and across the face of our warming, wounded planet.

It will become the “Oh my GOD. What the fuck was I thinking?” shameful secret people will occasionally and elliptically allude to by piping up with, “well, he did good after 9/11” as schoolchildren are taught what a disaster on every front and by every measure he was, and as adults who now have to pay and pay dearly for the myriad lies and crimes and follies of George W. Bush recount his Top 100 Fuckups and bitterly laugh and laugh and laugh.

So that’s where we are now.

In Part 3, my stab at how one piece of this mess may work itself out.

drifty, this triptych is your absolute. best. ever. And that's saying something.

And sorry about your suit bag. At least the cat had a good laff.

sharkbabe,
That is terribly nice of you to say. Thank you.

A fantastic blog yours. Keep it up.
If you have a moment, please visit my baby modeling agencies site.
I send you warm regards and wish you continued success.