If you are a normal person living a normal life, you would not know that a guy named Andrew Sullivan is in the middle of another of his periodic tantrums about the McCarthyism of Liberals.

Between you and me (because no one else reads this stuff :-) Mr. Sullivan's periodic Holier Than Thou outbursts of hysterical histrionics about the horrors of the Lefty Liberal Left are getting to be a bit of a bore, but I guess he needs something to fizz up his Pot-'n-Popes-'n-Stuff blog's otherwise mostly trivial parade of aggregated-other-people's-stuff and pop-culture filler.

Part of his problem stems from the fact that, even after +30 years spent Opining Very Loudly About America, it is glaringly obvious that Mr. Sullivan knows shit-all about some of the most basic roots and branches of this country's politics and culture. He is, for example, perpetually flummoxed by the fact that American Conservatism as it is practiced in the real word bears no relationship to the academic, dorm-room-bong-a-thon Conservatism of his imagination.  He also still cannot wrap his head round the fact that, here in these United State, bible-sanctioned white male supremacy and all of it's various, mutant offspring remain a really big deal (a rough equivalent of Mr. Sullivan's cluelessness would be me moving to Ireland 30 years ago, growing famous by punditing about Irish politics and society and yet, after 30 years, still being unable to grasp why the Irish continue to insist on making a big deal about the English.)

Mr. Sullivan is also, by all appearances, incapable of comprehending that American Liberalism is not a carbon copy of British Liberalism, nor is it defined by the handful of LGBT activists -- primarily clustered around the few square mile of D.C. and New York where Mr. Sullivan spends most of his time -- with whom he has been engaged in a prolonged pissing contest for the last few decades.

However, rather than write my umpteenth post detailing Mr. Sullivan's flat-footed hypocrisy on the subject of free expression (See, "Ferguson, Niall", "Dynasty, Duck" and "Baldwin, Alec")  -- 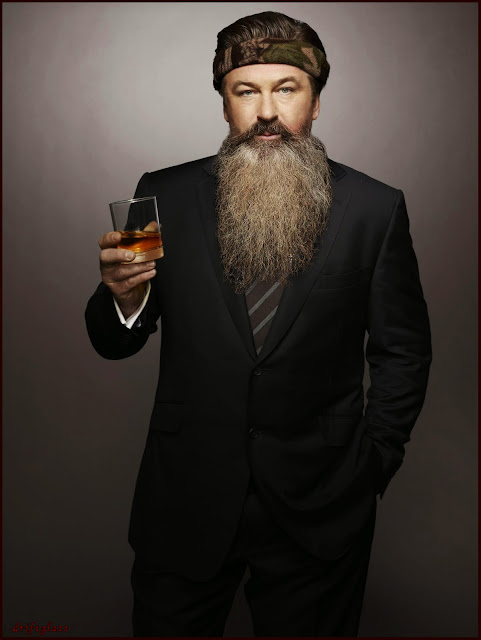 -- this time I'll let people who draw a salary for writing this stuff carry the ball:

Andrew Sullivan has come to the defense of the Mozilla CEO, Brendan Eich, writing that Eich is being treated as a "heretic," a victim of "left-liberal intolerance" and the "ugly intolerance of parts of the gay movement," forced to resign in the wake of stinging criticism of his financial contribution to the passage of Proposition 8 in California in 2008.

According to Sullivan, the gay mafia has struck again, destroying a man and bringing him down because he would not conform to its thinking. You would be justified in being massively confused by that, because this is the same Andrew Sullivan who was first out of the gate with the pitchfork, driving Alec Baldwin off MSNBC -- as Baldwin bombastically charged that he was the victim of Sullivan and his "fundamentalist wing of gay advocacy."
It may sound contradictory, but actually, it's all pretty consistent for Sullivan if you think of it this way: He often attacks liberals first, and homophobes second. Alec Baldwin is a liberal (whom Sullivan, rightly, believed was getting a pass from some sectors of the liberal establishment), and so are those among Mozilla's employees and users of its Firefox browser who criticized the Mozilla CEO, driving him to step down.
Now, I wholeheartedly agree with Sullivan on his criticisms of Baldwin. I, too, slammed Baldwin -- and incurred the wrath of many of his fans who called in to my radio program -- because homophobic speech and actions must be vigorously challenged whether they come from a progressive or a conservative. But if you're going to get worked up over a guy hurling the word "cocksucker" in the heat of the moment -- while he also gave money and support to the causes of LGBT rights and marriage equality -- you should be completely outraged by a man unapologetically giving money to a hate campaign that helped pass Prop 8 by demonizing gay men and lesbians in television ads charging that gays are dangerous to children. The damage done by those ads is incalculable, turning neighbors in California against one another, empowering anti-gay bullies in schools as well as the bashers on the streets.
But Sullivan is even more wrong because it wasn't the Prop 8 contribution, and Eich's refusal to renounce it, that eventually did Eich in. He was being defended by company executives last week and throughout the early part of this week, even as the dating site OKCupid had urged users to boycott Firefox. Eich even gave an interview on Tuesday suggesting he was staying put. Eich only announced he was stepping down after it was revealed late Wednesday that he'd given money to Pat Buchanan's presidential campaign in 1992, and later to Ron Paul's campaign. Suddenly, in addition to defending a CEO who gave money to homophobic efforts, Mozilla would have to defend a CEO who supported Buchanan, a far-right extremist and isolationist who's been accused of racist and anti-Semitic attacks, and who also was, rightly, driven off MSNBC -- though that took years longer to accomplish than the few weeks it took to purge Alec Baldwin.
...

One detail the author fails to note is that, in addition to brutally excoriating MSNBC for their decision to hire Mr. Baldwin in the first place, then eagerly whipping up the torch-and-pitchfork mob that drove MSNBC to fire Mr. Baldwin, Mr. Sullivan, also congratulated MSNBC on sacking Baldwin after they had done the mobs bidding:

MSNBC did the right thing.

But now that Mr. Sullivan wants to get up on his hind legs and emote indignantly in opposition to something which he was so recently squeeeeeealing in favor of, he has to resort to the most truly Conservative dodge of all -- weaselly sniveling about how he never really meant what he meant or say what he said:

I never called for Baldwin to be fired – just that his rank use of homophobia while threatening violence made his claim to be a liberal preposterous. I was calling out hypocrisy.

I suspect at least part of the reason Mr. Sullivan sports a beard is because he can't stand the sight of Don Rumsfeld --


-- leering back at him every time he looks in the mirror.

When it comes to Prop 8 boycotts, Andrew Sullivan likes to multitask: He’s both FOR and AGAINST them. pic.twitter.com/Fwlj77Q8Mn


Meanwhile, on the other side of the moral universe, from worker bees at Bill Kristol's odious Weekly Standard:


I have to say that @sullydish is really fighting the good fight. http://t.co/3PfvKtPkv7
— Mark Hemingway (@Heminator) April 5, 2014


Andrew Sullivan is indispensable on issues such as this.
— Charles C. W. Cooke (@charlescwcooke) April 4, 2014

Andrew Sullivan is such a goddamn fuckwit.

I keep remembering that he wrote his "I am a bear! I like bears!" post as if he were Peggy Noonan relaying the wisdom of Ronald Reagan's astrologer.

But now that Mr. Sullivan wants to get up on his hind legs and emote indignantly in opposition to something which he was so recently squeeeeeealing in favor of

Andrew Sullivan "not a conservative"? Go on, pull the other one.

Thanks for that DG. Brilliant as usual.

I'm not exactly surprised that Sully would defend a fan of Pat Buchanan, given his own support for Charles "Bell Curve" Murray. Interesting company he keeps.

Needless to say, the guy who's actually paid to criticize Sullivan must spend half his time saying that Sullivan is correct and insightful.

This does not help our mission. Sullivan and his ilk are morons with no value to anyone and must never, ever, be given the slightest deference. The only time he's correct is when he's in the back of the line behind all the other people who beat him to it.

Sullivan's always been a contemptible dick.

Back in 2000, early on in his blog career, I used to exchange reasonably polite e-mails with him, since at that point I still labored under the misapprehension that he was merely misguided, not fundamentally dishonest. That all changed rather quickly, after the election, and his bizarre take on it. Finally, I said "I'm going to give you the honest Republican test. If Gore and Bush's situation in Florida had been exactly reversed, do you think the Supreme Court would have made the same decision.?" To which he replied "Probably not, but they did the right thing anyway because Gore doesn't deserve to be present." Swear to god, he actually said that.

Andrew Sullivan is to LGBT Americans what Allen West is to Black Americans and Phyllis Schlafly is to Vaginal Americans: nothing more than a prop for the right-wing to trot out at convenient, click-advantaged moments to say, "See! Here's [one] who agrees with us!"

She is fierce! Silly Sully can kiss my Left-Liberal power glutes.

I don't mind a blogger being a bit of blowhard, and indeed I think it can make him or her readable even if you disagree the opinion. But there's a duality to the Sullivan persona which drives me crazy anyway. Half the time, it seems, he handing out awards for over-the-top punditry he dislikes, be it from Michelle Malkin or Nicholas von Hoffman. And then there's this guy who tags half of America as treasonous for living on the coasts. There's the guy who waxes philosophical about conservatives like Oakeshott, and then plays the transgressive queer celebrating bear sexuality. Except, when you get down to it, he's usually less transgressive than simply being friends to assholes like Ronald Reagan, Margaret Thatcher, Jeane Kirkpatrick, George Bush, Charles Murray, Camille Paglia, and Betsy McCaughey.

I'll confess I really dislike Sullivan not because he's a success at this blogging racket but because he's so fucking smug about himself and his precious religious feelings, and his deeply abiding faith in society (never noticing how Thatcher used to mock the very idea). He's a genius whose real subject is himself, which leads to chronic self-delusion. How can anyone as narcissistic as Sullivan be trusted? He can't. He's too busy posting selfies of himself as this wonderfully heterodox thinker to realize how miserably corrupted he is by his pursuit of celebrity.

Kudos to Walt and his analysis of Mr. Sullivan. My only point of disagreement is with your assertion regarding the corrupting effect of his "pursuit of celebrity". He is by nature - as evidenced by his personal/political and printed word history - a corrupt person and his pursuit of celebrity is a symptom of that corruption rather than a cause.

[Sully]'s a genius whose real subject is himself, which leads to chronic self-delusion.

I used to love Sullywatch. Actually Sullivan is quite like Brooks, even if that sounds too convenient. Neither of them make sense. I know people don't like this point of view, but Sullivan is me when I am a pothead. Everything I say or do is excellent, I know I need to do it on a grand scale and even be a career stoner, because I am always right, like lime green shoes on a 64 year old guy. For him this is a lifestyle. I dunno, whenever I read him, beginning at his first premise, I am scratching my head, "what?" And then the other part is that he's evil.