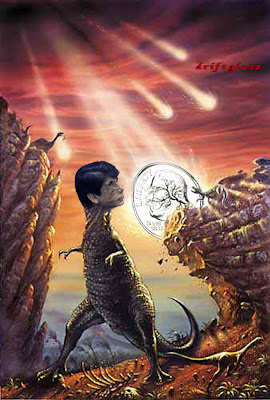 DG- you're closer to the action so I am curious if you can comment on my understand of things. It seems to me that Obama got tired of Blogo and, one phone call later, Blogo was in handcuffs.

This leaves me with the impression that Obama knows how to play the game of Chicago politics. If this supposition is correct it leaves me drooling to see how he chops up the GOP come 1.20.09.

But the longer, juicier answer is that the known facts admit a certain, compelling logic out of which one can easily reverse-engineering the notion that someone near the intersection of Team Obama and the governor's stunningly ruthless, fire-sale approach to public policy suddenly found it necessary to put the U.S. Attorney's office wise to what was going on. And it is this necessarily-speculative-but-not-unfounded reasoning elevates the idea of a highly-placed dime-dropper above other kinds of routine, every-day water-cooler conspeculation ™ (conspiracy + speculation).

Do people even have water coolers anywhere anymore? And do they still gather 'round them so the office griot can tell sad stories of the death's of kings?

Here are some snips from what one of the city's more wired-in political writers had to say on the subject:

Blagojevich, Obama and who dropped the dime

The demise of Rod Blagojevich continues to make so much news, I almost don't know where to start.
...

In bringing the charges on Tuesday, Mr. Fitzgerald conceded that he'd junked his normally careful, methodical investigative pace in favor of warp-speed action on alleged illegalities that occurred as recently as two weeks ago. Why such an extraordinary shift in tactics? He cited "imminent" pending matters, including the vacancy of Mr. Obama's former Senate seat.
...

In conversations taped by the feds, Mr. Blagojevich repeatedly gripes that Mr. Obama isn't offering him anything for picking Mr. Obama's choice to the Senate. The choice, referenced only as "Senate Candidate 1," almost certainly refers to Valerie Jarrett, a longtime Obama friend and associate. Numerous sources confirm that Ms. Jarrett indeed wanted the seat — and Mr. Obama wanted her to have it — until she abruptly pulled her name out of the running in mid-November.

Mid-November is when Mr. Blagojevich is roundly griping on the tapes that Team Obama won't give him anything for a Jarrett pick. No Cabinet job, no ambassadorship, no nothing, Rod complains, according to the feds. "They're not wiling to give me anything except appreciation. F--k them."

Moreover, Mr. Blagojevich likely did not figure out on his own that the Obama folks were going to stiff him. Someone told him, someone who talked to them. And neither Mr. Emanuel nor Ms. Jarrett is the type to take kindly to being extorted or being pushed around. From my experience, either is quite capable of sending a message to Pat Fitzgerald.

The timing of Mr. Fitzgerald's request for the phone taps, Oct. 21, is a bit early for Ms. Jarrett to be moving for the Senate seat. So perhaps Mr. Fitzgerald had another tipster, and then got lucky with the tapes on the Big Senate Sale. Certainly FBI agents in early October were receiving tips that Mr. Blagojevich was trying to cash in before a new state ethics law takes effect this New Year's, and that likely prompted the request for the court order. Perhaps Mr. Blagojevich's former chief of staff, John Wyma, who appears to be referenced in the charges, played a role.

On the other hand, Mr. Obama has all the reason in the world to put distance between himself and Radioactive Rod. What better way than to put Mr. Blagojevich in a nice cell somewhere?

Who did in who? That remains a really good question.

The truth usually comes out, and usually not at a time and place of your own choosing.

Now suppose you are Team Obama. You have been accumulating media and public goodwill and political capital by constructing a gold-plated Cabinet in public view, one careful board-foot at a time. Talking heads have started using the names "Obama" and "Lincoln" together in long, breathless paragraphs. You have been burnishing your rep as squeaky-clean by soliciting resumes through a massive and rigorous online questionnaire/filter that demands applicants empty every pocket of every time they ever said "fuck" in an email or on a Daily Kos comment thread.

And you have very ostentatiously stayed the fuck (Damn, there goes my Obama-job) out of the shitmire that is Springfield politics.

This is the moment when a certain punk-ass governor (who apparently didn't get the fucking message when you Very Publicly failed to invite him to lead his own state's delegation at the convention in Denver) decided you'd reached your maximum extortability price-point and decided to take a big, corn-fed dump in your punchbowl.

You know that he knows that you know. And you know that in a week or a month or a year, the U.S. Attorney is gonna know, and then the fat will be in the fire.

And which moment "the right thing" aligns perfectly with "the expedient thing", and you pick up the phone.

Of course you pick up the phone.

We join our dramatic re-creation already in progress...

Fitzgerald: And your name is...?

Fitzgerald: Well, uh, "Jim", what specifically are you alleging the governor is up to?

"Jim": I'm not alleging a fucking thing, Fitz. I'm sayin' right out that it's barratry, Fitz. He's a fucking barrator, pure and simple.

"Jim": What, you all are were too good to read Dante up at Hah-vahd?

Fitzgerald: Fine. You're the smartest kid in the world. You happy now?

"Jim": Actually, yes. Don't know if you noticed, but in about a month we're taking over the United States of America without firing a shot. And as fucked up and broke as it may be, that's not nothin'.

"lo, one of the Ancients of Saint Zita put him under,
for I return again to that city, which I have furnished well with them;
every man there is a barrator, except Bonturo:
there, for money, of No they make Ay."

He hurled him down, and along the hard crag he turned, and never mastiff loosed was in such haste to follow a thief.

A "barrator", Fitz, is the Very Old School name for someone who destroys the civic life of a community by buying and selling public office.

Fitzgerald: No pun intended, Jim, but why the Hell would anyone even know that?

"Jim": "Knowing shit" is why the people elected us, Fitz.

And now you're the U.S. Attorney's office, being told by a very credible individual that the governor -- who has already been under investigation for years -- was actively engaged in a scheme to sell Barack Obama's Senate seat. Do you continue to proceed at your slow, methodical pace and risk letting one of the biggest and most-potentially embarassing political crime in memory be committed right under your nose (knowing that the soon-to-be Obama Administration will know you let it slide) or do you stomp the pedal through the floorboard, get a wiretap in there, and move expe-fucking-ditiously?

Of course I'm not saying anything like that happened, or happened in that way, or that anyone in public life quotes "The Inferno", or is even aware that "Dante" is phonetically anything other than the name of the the Detroit Lion's new QB.

Because, of course, the view from the ground is almost always cluttered and chaotic.

Just as the view from space 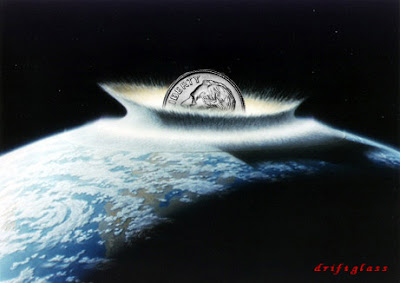 is almost always spectacular.
at December 10, 2008

is it just me or does Blogo look like Dondi?

If you are a living and breathing, sentient being with the brain pan of a fucking Salamander, the name Patrick Fitzgerald on your mail should cause you to shit down your leg.

Oh, BTW, I don't really care for that little fucker Rahm Emmanuel, seriously, but now I see the genius of having that rabid wombat mother fucker for Chief of Staff.
The only remaining problem I have is the potential for his anterior to be exposed to the Noon Day sun.
That feller has major baggage.
Of course, Scooter Libby is still buying a Starbucks somewhere every fucking day.

Do people even have water coolers anywhere anymore? And do they still gather 'round them so the office griot can tell sad stories of the death's of kings?

My son has one in his room at UofI.
Concensus: Blago's an idjit.

In the office? Folks are chained to their desks out of fear of losing their fucking job before/during the holidays.

They aren't doing any more or less work per se, but they LOOK busy and industrious.

What's truly laughable is: How is this peckerhead's blatant and arrogant abuse of his "opportunity" different than what the Shrub and his peeps have been doing for the last 8 years? And where were Ashcroft, Gonzoo and Murkly's dimes?

Great p-chops as usual. But we're venturing into Bob Greene territory on Blago's blunders. Bag him. Tag him. He's been a dead man walking since election day.

Lisa Madigan and Patrick Quinn are the ones to focus on now.

That fella Jim is some smart fella: "Knowing shit" is why the people elected us, Fitz."
Yup! Just about the ONLY reason, actually...

Actually, the traditional head of the Illinois delegation to the DNC is the mayor of Chicago, so the slight to Blagojevich was not that. Notice that you did not see him give a podium speech of any sort, you did not see him in a photo op at either Denver or Grant Park; you didn't see him at all at Grant Park (but Durbin and Daley, inter alia, were there).

-anon says stuff about: 'sightings in Denver and Grant Park'

Thanks DG, even if the view is chaotic, the writing is spectacular as always. But all this makes for good theatre.

Blader, politics is a spectator sport in Chicago, and we do happen to use a lot of the techniques used in Kremlinology. The most handy is to watch the front row of the annual St. Patrick's Day Parade in Chicago. The closer one is to Mayor Daley, the more powerful they are.

Preznit, I have been racking both brain cells trying to figure out who he looked like. Thanks. Dondi is now what I shall call him.