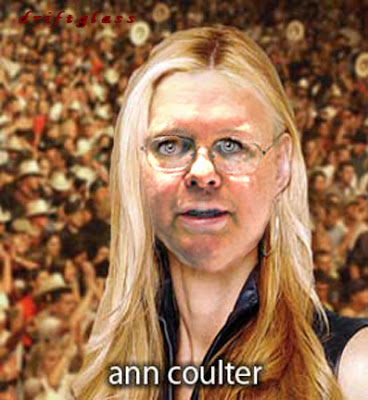 Instead of the usual Sunday menu, I wanted to talk a little bit about this grotesque face.

Civilization has shown us this ugly countenance before.

It is our dark side, and like an opportunistic virus it swims in the shit inside our reptile brains and waits for us to be weak or afraid or greedy. Then it comes roaring out of the shadows yet again, offering us scapegoats to blame and fury to tuckpoint up the hollow places in our souls.

It offers us the warmth of a sick fever, the comfort of the grave. It offers us the chance to play god in the only way it understands a god to be: not loving or merciful or wise, but brutal and exterminating.

It offers us a giddy, teevee-friendly Armageddon, where the Bad People all perish in awesome explosions far away leaving behind only the good, the pure, the righteous.

And all it asks in return is your soul.

A long time ago I believed in that quaint method of dealing with lunatics best summed up by Rameses II in “The Ten Commandments”. The “Let him rave on, that men will know him mad.” school of thought, (which always seemed very reasonable if you assume the person involved isn’t Moses.)

I no longer believe this kind of benign neglect works, but many nice people still do. They wonder “Why waste precious adjectives on the likes of Coulter and Hannity? Limbaugh and Falwell?”

Why bother zeroing in on these obviously unhinged, obviously evil bottom-dwellers and the moral plague rats who blindly and orgiastically follow them down and down and down forever?

They and the homunculi who shower them with cash and cachet and oinky, monosyllabic praise are unreachable. As lost to the discourse of civilized society as the dead. As unmoved by reason, compassion or simple truth as an asteroid, their orbits are affected only by the gravity of hate and fear, lies and power.

So why speak of them at all?

And I think the best place to begin to answer that question is with the story of little Billy Norwich, in the Year of Our Lord 1144.

This site sums up the narrative in brief, chilling detail:


In 1144 CE, an unfounded rumor began in eastern England, that Jews had kidnapped a Christian child, tied him to a cross, stabbed his head to simulate Jesus' crown of thorns, killed him, drained his body completely of blood, and mixed the blood into matzos (unleavened bread) at time of Passover. The rumor arose from a former Jew, Theobald, who had become a Christian monk. He said that Jewish representatives gathered each year in Narbonne, France. They decided in which city a Christian child would be sacrificed.
…


…
At the dawn of day, on the Monday [March 20, 1144] after Palm Sunday, that detestable messenger of the Jews set out to execute the business that was committed to him, and at last the boy William, after being searched for with very great care, was found. When he was found, he got round him with cunning wordy tricks, and so deceived him with his lying promises....

HOW ON HIS GOING TO THE JEWS HE WAS TAKEN, MOCKED, AND SLAIN....

Then the boy, like an innocent lamb, was led to the slaughter. He was treated kindly by the Jews at first, and, ignorant of what was being prepared for him, he was kept till the morrow. But on the next day [Tuesday, March 21], which in that year was the Passover for them, after the singing of the hymns appointed for the day in the synagogue, the chiefs of the Jews.... suddenly seized hold of the boy William as he was having his dinner and in no fear of any treachery, and ill-treated him in various horrible ways.
…

And so began the despicable tradition of the Blood Libel.

The creation of a fiction from whole and holy cloth to give shape and bloody purpose to the seething anti-Semitism that had been bound into the RNA of the Catholic (and, later, Protestant) Church almost since in inception.

It is the Great Lie – the Foundational Meme – which formed the basis for the whole bill of indictments for wholly imaginary crimes committed by Jews against innocent Christians. The Blessed Rationale for first hating, then persecuting, then mass murdering the Jews of Europe.

It is the laying of the first length of track that eventually ran all the way to the ovens of Auschwitz.

What is vitally important to understand – and the reason that we ignore our contemporary hatemongers at our peril – is that this did not happen all at once.

The Catholics of Europe didn't just wake up one day and decide to begin the forced-conversion, imprisonment, and slaughter of the Jews any more than Germans all just spontaneously decided one day to set up extermination camps.

It happened slowly, over the course of time, and it is exactly that species of devolution is exactly what we are witnessing in America today on the Right. The slow and deliberate emergence of a radical and vicious new Conservatism that is obliterating any lingering traces of the movement’s Goldwater or Rockefeller roots.

A sadistic and bloodthirsty Conservatism that has begun to rapidly crystallize like Iraq Candy from the hatespeech in which it has been steeping for a long, long time.

Today there are the Coulter Conservatives.

They are the intermediate form. The foundational and predicating chrysalis from which an even more brutish and explicitly violent Conservatism is emerging. Which is why clearly understanding the terrible dynamic of Conservative lies becomes crucial.

Pope Innocent IV ordered a study in 1247 CE. His investigators found that the myth was a Christian invention used to justify persecution of the Jews. At least 4 other popes subsequently vindicated the Jews. However, the accusations, trials and executions continued. In 1817, Czar Alexander I of Russia declared that the blood libel was a myth. Even that did not stop the accusations against Jews in that country.

"Holy shrines were erected to honor innocent Christian victims, and well into the twentieth century, churches throughout Europe displayed knives and other instruments that Jews purportedly used for these rituals. Caricatures of hunchbacked Jews with horns and fangs were depicted in works of art and carved into stone decorating bridges. Proclaimed by parish priests to be the gospel truth, each recurrence of the blood libel charge added to its credence, thus prompting yet more accusations. This vicious cycle continued to spiral."

Nicholl reports that "there are 150 recorded cases of the charge of ritual murder, and many led to massacres of the Jews of the place."

And as this partial timeline shows, once it gained a toehold, the lethal lie of the Blood Libel simply metastasized over time.


1144 CE: Jews in Norwich, England were accused of the ritual murder. This is believed to be the first recorded case of the "blood libel" myth. Jewish leaders in the area were executed.

1171: Jews in Blois, France were accused of ritual murder. All of the Jews in that town (34 men, 16 or 17 women) were "dragged to a wooden tower where they were given the option of baptism or death. None chose the former." 7 They were burned alive. A second source says that 31 were killed.

1181: Three Christian boys disappeared after playing on a frozen river in Vienna, Austrai. Several "witnesses" swore that Jews had slaughtered the boys. Three hundred Jews were burned at the stake. After the spring thaw, the bodies of the boys were recovered. They had drowned, and were otherwise unharmed. 7

1244: London Jews were accused of ritual murder and fined heavily.

1255: The body of a little boy, Hugh, was found in a cesspool near the house of a Jew in Lincoln, England. The latter was tortured, confessed that he had engaged in ritual murder, dragged through the streets, and finally hung. 100 Jews were transported to London and charged with ritual murder. One was acquitted; 2 were pardoned; the rest were hanged, either with or without a trial. One source states that 19 Jews were hung without benefit of trial.

1263: A Dominican monk published a theory that God had inflicted Jews with a terrible disease because they had murdeed Yeshua. He reasoned that the only cure was to kill an innocent Christian child and consume its blood.

1451: Pope Nicholas V appointed John of Capistrano to organize the Inquisition of the Jews. John repeated the old charges of ritual murder and host desecration.

1475: A few days before Easter, Samuel, a Jew in Trent, Italy, found the body of a Christian infant named Simon. He had apparently drowned in a nearby river. A number of Jews were arrested and tortured. All confessed to murdering the infant. They were burned at the stake. Stories spread of miraculous cures which were believed to have been caused by contacting Simon's bones. Simon was canonized as a holy martyr by Pope Gregory XIII. Simon's beatification was reversed in 1965. 7

1492: Tomas de Torquemada, the Grand Inquisitor of the Spanish Inquisition engineered a blood libel case in La Guardia, Spain. Jews who had converted to Christianity were accused and tortured. They confessed to helping the chief rabbi to abuse and crucify a Christian child. 7

1541: John Eck, a Roman Catholic writer, wrote a pamphlet "Refutation of a Jewish Book." He repeated the ritual murder and host desecration myths.
...

Come on, guys...it's all in innocent fun. Ann Coulter is a SATIRIST...I know because David Horowitz said so at a YAF conference televised on C-SPAN 2 several months ago, and David Horowitz knows funny! Geez... you libruls have NO sense of humor... What? She WASN'T kidding...?

IIRC, the poorly-named Pope Innocent IV was the one who sanctioned beatings for his inquisitors, which would soon blossom into real torture.

Disclaimer:
Absolutely no slur to the transgendered intended.

That is one ugly fucking man.